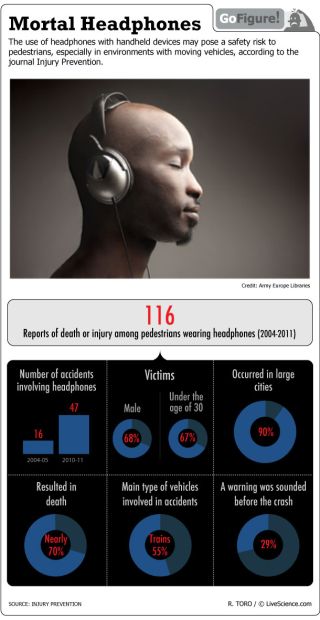 The best headphones often block out any surrounding noise so you can zone out with your favorite tunes. But that same feature can be a lethal one for pedestrians, finds a new study revealing serious injuries linked with pedestrians wearing headphones has more than tripled in the past six years.

The reason: With these electronic earmuffs on pedestrians likely can't hear the trains or cars around them, the researchers said. In many of the cases the scientists studied, the cars or trains were sounding horns that the pedestrians couldn't hear, leading to fatalities in nearly three-quarters of cases.

"Everybody is aware of the risk of cell phones and texting in automobiles, but I see more and more teens distracted with the latest devices and headphones in their ears," lead study author Dr. Richard Lichenstein, an associate professor of pediatrics and director of pediatric emergency medicine at the University of Maryland School of Medicine, said in a statement. "Unfortunately as we make more and more enticing devices, the risk of injury from distraction and blocking out other sounds increases."

Lichenstein and his colleagues reviewed past reports and databases published between 2004 and 2011 of pedestrian injuries or fatalities from crashes involving trains or motor vehicles. They specifically looked at those cases involving headphone use.

In total, they reviewed 116 accident cases in which injured pedestrians were documented to be using headphones, with 70 percent of these accidents resulting in death to the pedestrian. More than two-thirds of victims were male (68 percent) and under age 30 (67 percent). More than half of the moving vehicles involved in the accidents were trains (55 percent), and nearly one-third (29 percent) of the vehicles reported sounding some type of warning horn before to the crash.

The increased incidence of accidents over the years closely corresponded to documented rising popularity of auditory technologies with headphones, the researchers report this week in the journal Injury Prevention.

The researchers say the link between headphone use and injury may boil down to two factors, distraction and sensory deprivation. The distraction caused by the use of electronic devices has been coined "inattentional blindness," in which multiple stimuli divide the brain's mental resource allocation.

In accidnets involving headphone-wearing pedestrians, the distraction may be intensified by sensory deprivation, in which the pedestrian's ability to hear a train or car warning signal is masked by the sounds produced by the portable electronic device and headphones.