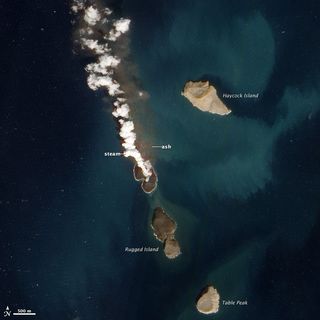 A new island forming in the Red Sea, about 60 kilometers (40 miles) from the coast of Yemen. This natural-color image was acquired by the Advanced Land Imager (ALI) aboard the Earth Observing-1 (EO-1) satellite.
(Image: © Robert Simmon, using ALI data from the EO-1 team)

The island, a mound of lava and ash about 2,000 feet (600 meters) across, piled up during the eruption of an underwater volcano in the Red Sea in mid-December. It was initially suspected of being short-lived — most pileups of volcano debris in water quickly crumble back to the depths — but scientists say this one has solidified nicely.

The new land mass has arisen at the northern edge of the Zubair Islands, a group of 10 islands and shoals off the coast of Yemen that are all thought to have formed during prehistoric volcanic eruptions.

For volcano debris to lay down a permanent address, it must build up faster than waves can erode it; the new island grew at such a rate. According to NASA, "past eruptions in the Zubair Islands were primarily effusive, with relatively runny lava forming thin lava flows. In contrast to the fragmented rock that forms when lava interacts  with water, lava that solidifies on land is tough, so this new island is likely to stick around." [The Most Mysterious Places in the Ocean]

New islands are rare, but not unheard of; other examples include Surtsey, off the coast of Iceland, which formed over the course of a four-year volcanic eruption that began in 1963, and Anak Krakatau, in the caldera of Krakatoa in Indonesia, which rose from the water in August 1930.