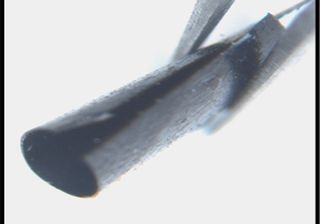 Sheets of paper can be made to work like batteries and power electronics, research now reveals.

The paper sheets could even get power from sweat or blood and, in the future, energize devices implanted within people, scientists said.

“When we get this technology down, we'll basically have the ability to print batteries and print supercapacitors," said researcher Pulickel Ajayan, a materials scientist at Rensselaer Polytechnic Institute in New York. "We see this as a technology that’s just right for the current energy market, as well as the electronics industry, which is always looking for smaller, lighter power sources."

To make the paper batteries, researchers first impregnated everyday paper sheets with carbon nanotubes, pipes only nanometers or billionths of a meter wide—about the diameter of the DNA helix. These make the paper black and help it to conduct electricity .

When the scientists soaked electrolytes—salty compounds that help supply the energy in batteries, in general—into the paper, they developed working batteries.

A battery the researchers made could power an LED light, the kind now found in many flashlights. The scientists also created other kinds of energy sources with the paper batteries, such as supercapacitors, which currently often find use in electric vehicles, helping them last longer on the road.

The paper batteries also worked with many different electrolytes, even salty bodily fluids such as sweat and blood. The success of this finding suggests many potential biological and medical applications. The devices also can be stacked, like a ream of printer paper, to work together and thus provide more total power output.

The papers are lightweight and flexible. They worked even if rolled, twisted, bent or cut, over a wide range of temperatures, from "-100 degrees F to 350 degrees F, making them useful in both the Arctic and Death Valley," researcher Robert Linhardt, a biopolymer expert at Rensselaer, told LiveScience.

The researchers have not yet developed a way to inexpensively mass-produce the devices. They hope to print the papers using a roll-to-roll system similar to how newspapers are printed.

The researchers are now investigating ways to boost the efficiency, reliability and safety of the batteries and supercapacitors, as well as different manufacturing techniques. They detailed their findings online Aug. 13 in the Proceedings of the National Academy of Sciences.