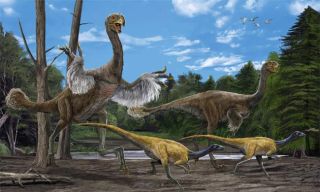 Evolution is a tale of gradual change, but some animal alterations appear to have advanced by leaps and bounds.

Ancient four-limbed fish crawled out of the sea. Dinosaurs, insects and mammals took to the air. Our closest relatives straightened their backs and began walking upright on two legs.

But what made them do it? Charles Darwin taught us that evolution has no direction. Instead, living creatures exploit resources already available to them. So the answer eludes us there.

"For Darwin, the evolution of transitional forms was one of the most vexing questions with regard to his theory," said West Chester University biologist Frank Fish.

In "The Origin of Species," Darwin speculated on how natural selection could turn a land mammal into a whale. Since then, scientists have found clues to explain these animal transitions in the fossil and molecular records, as well as in energetic analyses, but the full story is yet to be discovered.

For instance, how terrestrial mammals moved back into the water and evolved into whales, seals and manatees continues to puzzle Fish and colleagues.

"Did the land-loving ancestors of these aquatic groups simply fall into the water, were they driven by hunger or did they seek safety while escaping from predators?" he asked. "The selection pressure must have been extreme as these new semi-aquatic mammals could not swim efficiently and there would have been additional large energy demands in thermoregulating in a highly thermally conductive medium."

Studies conducted by Fish on the energy demands of swimming have shown that the locomotion transition from crawling land mammals to swimming whales, manatees and dolphins came from a sequence of morphological changes. This transition to living in the sea involved changes from paddling with limbs to undulating the body to oscillating a tail, such as the horizontal tail flukes in modern whale species.

When ancestors of whales, dolphins and manatees changed their swimming stroke from paddling with paws to graceful tail movements, Fish said, their swimming performance improved and used energy more efficiently.

With the new discovery of whale fossils, scientists have only recently been able to study the efficiency of limbless swimming. However, bones alone cannot tell us the whole story of how and why mammals lost their limbs in the water.

"Because only the bones have been preserved, we still do not know when these transitional forms started to insulate the body with blubber and how the fluke's design changed to generate large propulsive forces with high efficiency for high-speed swimming," Fish told LiveScience.

Early whales such as Ambulocetus most likely returned to the water, said American Museum of Natural History paleontologist Jack Conrad, because water free of big crocodilians at that time represented an unexploited resource.

"These early whales were basically playing the same game that crocodiles play: Wait for something to come get a drink and then pull it in the water for dinner," Conrad said. "This is also the same game that early land vertebrates, early amphibians and early relatives of crocs and dinosaurs were playing. These animals weren't necessarily 'on their way' to being anything; they were well suited to being exactly where they were."

Not only is it more efficient to swim without limbs, burrowing without legs is also better, and this raises questions about the twists and turns of reptilian evolution.

"If you're a good headfirst burrower, arms and legs just get in the way," Conrad said. "You have to make bigger holes to fit your arms and legs, which create drag as you move through burrows."

For instance, although scientists know snakes can burrow more efficiently without arms and legs, exactly how they lost their limbs remains a mystery.

But which four-legged relatives and their family traits led the transition for legless snakes? Conrad explains that scientists have come up with three candidates—iguanas, monitor lizards, and skinks—as the most likely relatives to have made way for the slithering snake.

DNA evidence has pinned iguanas and chameleons as the closest relatives to snakes. But some scientists point to the elongated bodies and snake-like tongues of monitor lizards as signs that, over time, snakes evolved from some monitor lizards. Still others suggest the short or sometimes nonexistent legs of the 800 species of skinks are clues to where limbless snakes originated.

Between the holes in the fossil and molecular evidence, scientists can only make educated guesses for now as to where and when legs of snakes walked off into evolutionary history.

"It's like putting together a really big puzzle with only a quarter of the pieces and trying to figure it all out," Conrad told LiveScience. "You find tantalizing tidbits that lead you in one direction and others that send you in the other direction."

The puzzle pieces fit together recently for a team of scientists who studied why our closest ancestors stopped walking on all fours.

Biological anthropologist Herman Pontzer from Washington University in St.Louis and his colleagues found that walking on two legs costs humans only one-quarter the energy used by chimpanzees that knuckle-walk on four legs. The group measured the oxygen burned by five chimpanzees and four people as they walked on a treadmill. The findings were detailed in the July 16 issue of the journal Proceedings of the National Academy of Sciences.

In general, chimps exert more energy than people. But one chimp, with a longer stride than his fellow chimps, was more efficient at walking upright. Pontzer assumes the variation he saw among the five chimps in his study is similar to what exists in the wild. Some chimps are born with longer legs than others.

In the fossil record, the research team found evidence of changes in leg length and pelvic structure that may have made it easier for some chimps, like the one in their study, to stand upright.

"Variation is a foot in the door with which evolution can select for bipedalism," Pontzer told LiveScience. "Not only do we have system we can understand here, but it shows us how evolution could have tinkered with variation."