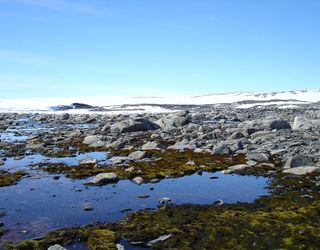 Moss beds provide habitat for other organisms that survive on the ice-covered Antarctic continent. A new study indicates increased wind speeds, linked with the ozone hole, have slowed the plants' growth by drying them out.
(Image: © Sharon Robinson)

Antarctica has no trees, but the moss shoots act somewhat like tree rings, recording evidence of environmental conditions as they grow. Now, Australian scientists have figured out how to decipher the record in the moss shoots.

Their technique relied on an atomic marker laid down worldwide half a century ago by nations testing nuclear weapons.

This bomb spike, which left tell-tale signs of radioactive carbon across the globe, allowed them to create a timeline of sorts along moss shoots collected from the East Antarctic. They then correlated the mosses' growth over recent decades with environmental data.

In doing so, they found evidence that, since the 1980s, growth rates among mosses in a region known as the Windmill Islands have slowed. The likely culprit: drying caused by stronger winds, which have picked up over the past 30 years. And these stronger winds are linked to the ozone hole above.

This trend could mean changes to these rare pockets of life on the frozen continent. [Ice World: Gallery of Awe-Inspiring Glaciers]

"People tend to think of Antarctica as a pristine wilderness but we can still damage its biodiversity from afar," said Sharon Robinson, a study researcher and professor in the Institute for Conservation Biology and Environmental Management at the University of Wollongong in Australia.

No vascular plants — a more complex type of plant with a system for transporting water and nutrients between its tissues — live on the Antarctic continent. Instead, only mosses, lichens and algae grow on Antarctica.

The team's final analysis included moss collected from beds from three peninsulas in a region called the Windmill Islands.

"The moss beds support many other organisms, such as fungi and invertebrates," Laurence Clarke, who conducted the research as a graduate student at the University of Wollogong, wrote in an email to LiveScience. He is currently at the Australian Centre for Ancient DNA at the University of Adelaide.

"If the moss beds dry out and disappear, this would be a significant loss of biodiversity in the region," he wrote.

They collected a number of species, but their results focused on one: Ceratodon purpureus. This moss is cosmopolitan, found from continental Antarctica to the Arctic; it has even been used to study the influence of gravity (or lack of it) on plant growth in space, according to Clarke.

The bomb pulse and other carbon clues

To get a handle on the mosses' growth rates over time, David Fink and Quan Hua of the Australian Nuclear Science and Technology Organisation checked the shoots for what is known as the bomb pulse.

In the late 1950s and early 60s, nuclear weapons tests doubled the level of a radioactive form of carbon, carbon-14, in the atmosphere. Since the Nuclear Test Ban Treaty went into effect in 1963, those levels have declined. This unnatural spike in radiocarbon became a boon for those trying to determine the year of birth associated with teeth found in forensic investigations, authenticate a wine vintage by determining its age or, in this case, date growth on moss shoots.

The mosses grow from their tips, incorporating chemicals from their environment into their shoots — laying down a record as they grow each summer. So, Hua and Fink sampled the shoots 0.12 inches (3 millimeters) at a time, tracing how the radiocarbon levels changed over time. This allowed them to date growth along the shoot and see how its growth rate changed over the decades.

The team also looked at another variant of carbon for a clue to the growing conditions. The ratio of a heavy, non-radioactive form of carbon, carbon-13, to regular carbon, carbon-12, indicates whether the moss shoot in question grew in a wetter or drier environment.

This information showed that growth rates increased when summers were wetter and decreased when they were drier, according to Robinson.

The researchers then compared the growth rate and water availability with records of temperatures, depletion of the protective ozone layer in the stratosphere above, and wind speed going back at least three decades.

They found that moss growth slowed down when winds picked up and also when the ozone hole was more pronounced. This wasn't a surprise; ozone loss and stronger winds over the continent are linked.

The annual ozone hole — which scientists expect to disappear in the coming decades — increases wind by cooling the polar stratosphere and causing a shift in the westerly jet stream, which moves closer to the poles, bringing more wind around the continent.

They also found that warmer summers, when more ice melts, making more water available, nurtured faster growth in the moss shoots. However, no long-term trend in growth rate related to temperature emerged from the shoots they studied. Instead, the overall trend appears to be decreasing growth coinciding with increased wind speed.

While evidence of climate change has been recorded on the subAntarctic islands and on the West Antarctic Peninsula, one of the most rapidly warming places on Earth, the continent has shown few signs of change.

This contrasts with the Arctic, where the effects of climate change, such as the retreating summer sea ice that is displacing walruses and polar bears, are much more dramatic.

Nevertheless, the continent is changing; not only has the infamous ozone hole been appearing annually since the 1970s, wind speeds have also been increasing for decades. More recent evidence suggests both the western and eastern halves of the continent have warmed up since 1957. And ice shelf melting in West Antarctica is removing ice faster than it is replaced by snow.

When data from weather stations is unavailable, the mosses, which live for decades, could be examined to reveal clues to past climate, Robinson told LiveScience in an email.

The study appears in the January issue of the journal Global Change Biology. David Ayre, of the University of Wollongong, also contributed to the research.