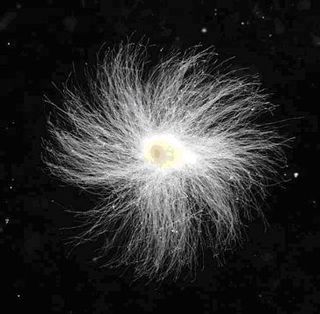 On Earth, moss grows up. Scientists expected that without gravity, it would grow randomly in all directions. In previous zero-gravity experiments aboard spacecraft, other plants followed the random rule.

The moss, however, began to grow radially outward from where it was sown, like the spokes on a bicycle's wheel. As the filaments of the moss increased in length, they formed arcs that created clockwise spiral.

"The results are unusual," said lead researcher Fred Sack, "as this is the first time researchers report seeing this kind of plant growth response in space."

Sack and his colleagues at Ohio State University published the results recently in the online edition of the journal Planta.

The strange growth pattern in space may be a result of moss having a structure built into its genetic code from eons ago as the moss evolved its ability to respond to gravity, Sack said.

The second of two moss experiments was aboard the Space Shuttle Columbia in February 2003 when the shuttle was destroyed upon reentry, killing all seven astronauts on board.

Many among the dozens of experiments aboard were damaged or destroyed, although under the circumstances, Sack was fortunate. He and his colleagues had spent nearly a decade preparing his work for the mission, and 11 out of 87 moss samples were salvageable even after their containers had crashed to Earth.

A control experiment back on the planet had moss growing on a clinostat, a machine negates the effect of gravity. The space moss pattern was replicated in the clinostat.

A cell at the tip of a moss filament is the only part of the plant that grows. When moss is grown in the dark, the tip cell fights against gravity in an effort to grow out of the soil and reach sunlight.

"In most plants, gravity guides the growth of roots or stems, which are made up of many cells," Sack said. "But in moss it is just a single cell that both senses and responds to gravity."

The moss cells probably sense the direction of gravity through the weight of heavy, starch-filled organelles that fall inside the tip cells, Sack figures.

Sack proposes that the growth witnessed in space is probably a remnant from before moss had evolved the ability to respond to gravity. "[I]n moss, gravity must normally mask a default growth pattern," Sack said. "This pattern is only revealed when the gravity signal is lost or disrupted."