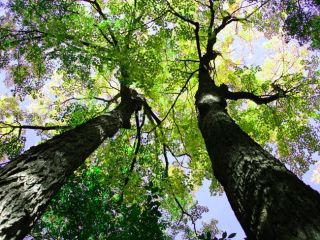 Birds confer a tall-growing benefit to trees by munching on parasites.
(Image: © stock.xchng)

The plan to use trees as a way to suck up and store the extra carbon dioxide emitted into Earth's atmosphere to combat global warming isn't such a hot idea, new research indicates.

Scientists at Duke University bathed plots of North Carolina pine trees in extra carbon dioxide every day for 10 years and found that while the trees grew more tissue, only the trees that received the most water and nutrients stored enough carbon dioxide to offset the effects of global warming.

The treated trees produced about 20 percent more biomass on average, but since water and nutrient availability differed across the plots, averages don't tell the whole story, the researchers noted.

These differences are key since the weather isn't always cooperative with human needs—if a drought takes hold, trees won't be able to do much in the way of carbon storage.

"If water availability decreases at the same time that carbon dioxide increases, then we might not have a net gain in carbon sequestration," Oren said.

Fertilizing forests to spur more carbon dioxide uptake is impractical, Oren added, because of the ramifications to the local environment and water supply.

"In order to actually have an effect on the atmospheric concentration of CO2, the results suggest a future need to fertilize vast areas," Oren said. "And the impact on water quality of fertilizing large areas will be intolerable to society. Water is already a scarce resource."

The results of the study, presented yesterday at a national meeting of the Ecological Society of America, also noted that only a few parts of a tree will store carbon for long periods of time.

"Carbon that's in foliage is going to last a lot shorter time than carbon in the wood, because leaves decay quickly," said Duke graduate student and project member Heather McCarthy. "So elevated CO2 could significantly increase the production of foliage, but this would lead to only a very small increase in ecosystem carbon storage."