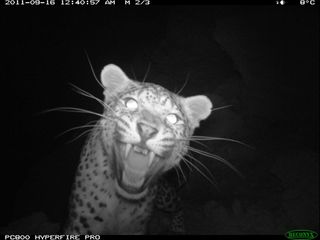 Camera traps positioned in the rocky terrain of Afghanistan's central highlands by conservationists recently snapped a surprising photograph of a Persian leopard, a top predator that was long thought to have disappeared from the region.

In a series of images that provides indisputable proof that the big cat persists in the country’s interior, a big adult leopard can be seen prowling around the camera trap’s field of view and investigating the camera itself, appearing to threaten it with canines exposed.

Camera traps can be key resources in evaluating rare species, particularly in remote areas that are hard for conservationists to maintain a presence in.

The cameras also snapped images of other wildlife, including lynx, wild cat, wolf, red fox, and stone marten, showing that many of these predators can find enough prey to survive in the Hindu Kush highlands, where Wildlife Conservation Society (WCS) scientists and Afghan rangers have been conducting surveys in recent months. [See the camera trap images .]

The indicators that sufficient prey is present "means that the rangelands can still support ibex, urial, and other species, which is a good sign for both wildlife and the people of this region who also depend on these grasslands for grazing," said Ghani Ghuriani, Afghanistan's Deputy Minister of Agriculture, Irrigation and Livestock.

"To see such a varied array of wildlife after we have endured so much conflict gives us hope for Afghanistan’s future," said Mostapha Zaher, Director General of Afghanistan’s National Environmental Protection Agency.

It was not all good news caught by the cameras, however.

"We are thrilled by these images and the story of survival that they tell, but we were sobered by the fact that the cameras also took photographs of local people walking past with guns. Poaching is still a very real threat, and WCS is committed to helping the Afghan government and local communities protect these rare and beautiful animals," said the deputy director of WCS's Asia program, Peter Zahler.

The WCS and the United States Agency for International Development (USAID) have been aiding the government of Afghanistan in launching initiatives to safeguard wildlife and the lands they depend on. As part of this effort, the country's first and only national park, Band-e-Amir, was created in 2009.

The country has also created its first-ever list of protected species, which prohibits hunting of snow leopards, brown bears and other species.