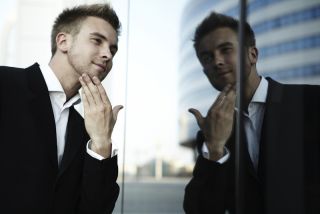 Women, make some room at the makeup counter: A new study finds that, like women, men are judged as youthful and attractive based on skin tone.

The research, supported by Procter & Gamble, finds that evenly pigmented skin is seen as more youthful, while a smooth rosy hue from hemoglobin, the component that makes blood red, is taken as evidence of health and attractiveness. The findings echo earlier research in women, whose skin is also judged more attractive when it is evenly pigmented.

But male beauty has been far less studied than female beauty, Fink said, especially in terms of skin tone. The jury is out, however, on whether men should saunter up to the cosmetics counter, as using makeup in an attempt to woo the ladies could backfire.

The skin you're in

To find out if male skin is judged by the same standards as female skin, Fink and his colleagues collected photographs of the faces of 160 freshly shaven British Caucasian men, ages 10 to 70. They cropped out a small square of cheek skin and showed that photograph to 152 men and 156 women. These volunteers each rated 60 digital images of cheek skin for their best guess as to age (from 1-to-99-years old), as well as attractiveness and health on a scale of 1 to 7, with 7 being the most attractive or the healthiest.

To tease out what skin pigments mattered in people's judgments, the researchers analyzed the colors of each cheek sample with a method called "chromophore mapping." This method allows scientists to determine how much melanin, a dark pigment, and hemoglobin, which gives a reddish tint, contributed to the skin color seen.

The results revealed that people prefer evenness in men's skin, just as they do in women's. Evenly distributed melanin was associated with youth, the researchers reported in November in the Journal of the European Academy of Dermatology and Venereology. Melanin is the pigment that darkens the skin after a tan; it's also the pigment produced in response to UV damage, causing age spots. Thus, Fink said, it makes sense that people would judge a face free of age spots or freckling as younger. [5 Reasons Aging Is Awesome]

Likewise, men whose skin had a more-even distribution of hemoglobin were judged as younger and more attractive. Both aging and health issues can affect the "blotchiness" of the skin, Fink said, so this result was also expected.

Although the study was only on Caucasians, Fink said he'd expect to see the skin of other races judged on its color contrast as well. But, he added, uneven pigments aren't as visible on darker skin, so people's judgments might not be as strong as they are for paler skin.

The team is now interested in finding out how women judge men's skin attractiveness when the guy has a beard or a bit of stubble. For now, does the research suggest that men, like women, should be breaking out the foundation and the blush brush?

"Taking care of one's skin is certainly beneficial to men," he said. But other studies of male attractiveness have found that women prefer men masculine, he said, and makeup might send the opposite message.

Nonetheless, the researchers said men could try to preserve their looks with daily sunscreen and tender care. For example, men might try to keep their skin smooth and avoid blotchiness, said Paul Matts, a Procter & Gamble scientist who collaborated with Fink on the study.

"Based on the results of our study where we found that uneven redness drives down perception of health and attractiveness, one simple strategy would be investing in shaving regimes which minimize irritation," Matts said.