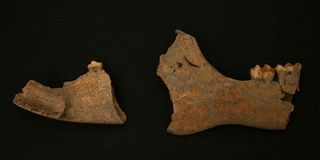 Bones from five non-native species of animals found on a tiny Caribbean island present a puzzle about the people who lived in the region long before Christopher Columbus arrived.

At two ancient villages on the island of Carriacou, researchers found remains of opossums, armadillos, guinea pigs, rabbit-sized rodents called agoutis, as well as nocturnal, piglike peccaries. All of these animals would have had to be transported to the West Indies.

Furthermore, the remains represent a small but unusually diverse number of animals for such a small island. For instance, only two peccaries and two armadillos were among the remains.

Remains of the species also have been found elsewhere in the prehistoric Caribbean in few numbers.

Because the animals seem scarce, it's unlikely they were daily meals for the island's human inhabitants, the researchers speculate.

"We suspect that they may have been foods eaten by people of high status, or used in ritual events," said study researcher Scott Fitzpatrick, an associate professor of anthropology at North Carolina State University.

By looking at the radioactive decay of carbon atoms in the samples, a technique called carbon dating, the researchers determined that the animals had been introduced to the island between the years 700 and 1400.  Christopher Columbus became the first European in the West Indies in 1492, when he arrived at an island he called San Salvador.

Humans began showing up in West Indies around 5000 B.C., when people from South America arrived on Trinidad. The Lesser Antilles, the group of islands that includes Carriacou, became inhabited around 2500 B.C. to 3000 B.C.

Since all five of the uncovered species lack the ability to swim or float from the mainland, human settlers must have brought them along, the researchers write in a study published recently in the Journal of Biogeography.

Supporting that idea, the dates of the remains match up with the dates associated with other materials found at the two ancient villages.