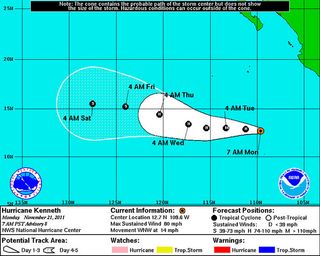 The forecasted path and intensity of Hurricane Kenneth over the next five days.
(Image: © NHC/NOAA)

A rare mid-November hurricane has formed in the eastern Pacific Ocean and could be followed by an equally rare tropical storm in the Atlantic basin.

Though the official hurricane seasons for both the eastern Pacific and Atlantic last until Nov. 30, it is rare for storms to form this late in the year, as tropical ocean waters are cooler than they are at the height of the season in August and September and therefore less likely to fuel the storms.

The last Atlantic hurricane to form in November was 2009's hurricane Ida. Hurricane Tomas was still swirling in the Atlantic as of Nov. 7 last year, though it formed in October.

The latest a hurricane has ever been observed in the Atlantic basin was the second Hurricane Alice of the 1954 season, spotted on Dec. 31, according to the NHC. The latest hurricane to hit the United States was a storm that made landfall near Tampa, Fla., on Nov. 30, 1925 (this occurred before storms received names).

Hurricane Kenneth is currently 705 miles (1,135 kilometers) south of the southern tip of Baja California moving in a westward direction. It has winds of 80 mph (130 kph), making it a Category 1 hurricane; the NHC expects the storm to strengthen in to a major hurricane (those of Category 3 or higher status) in the next day or so. Because it is heading away from Mexico, Kenneth is not expected to pose a threat to any coastal areas. [Natural Disasters: 10 US Threats]

This system is also not currently a threat to land as it is located 875 miles (1,408 km) northeast of the northeastern Leeward Islands and is more in a north-northeastward direction.