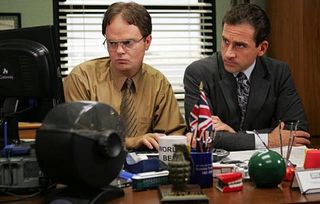 Question: would you work at a job that uses software to automatically track your work habits based on e-mails, phone calls and even video conferences? Someone at Microsoft thinks that's a good enough idea to deserve a patent.

The Microsoft patent filing — discovered by GeekWire— covers a computer system capable of not only monitoring the behavior of employees, but also assigning positive or negative scores to each action. Examples given include flagging someone who repeatedly cuts off colleagues during conversations, or raising the alarm over a supervisor who repeatedly bugs underlings during their lunch break.

Such scoring would presumably rely upon subjective criteria set by the employer regarding what counts as "good" or "bad" work habits. The range of possible monitored behaviors includes word phrases, body gestures, and mannerisms "such as wearing dark glasses in a video conference" or "wearing unacceptable clothing to a business meeting."

(Hopefully the system can be told to ignore the casual fashion of visiting Silicon Valley VIPs such as Facebook's Mark Zuckerberg or Google's Sergey Brin.)

Existing examples of employee monitoring software can already track websites visited, capture keystrokes or screenshots on a worker's computer, monitor e-mails and spit out transcripts of instant messaging or chat conversations. But Microsoft's idea would take workplace surveillance another step forward by creating software capable of analyzing those human behaviors.

In one sense, many technologies already monitor our behavior every day.  Millions of consumers already give up their online privacy by using social networking sites or doing online shopping. Even video games have begun more closely tracking the behaviors of gamers.

Still, people don't like giving up their privacy unless they get something in return. Some may put up with airport security because they buy into arguments about national security or want to feel safer. And they don't necessarily mind Amazon tracking their shopping habits if they can get better recommendations in return.

By contrast, typical workplace monitoring seems to benefit the employer at the expense of employees. Almost no worker except for Dwight Schrute of "The Office" can love such a scenario, and so bosses can probably expect massive opposition to any such plans.

But the Microsoft patent idea doesn't automatically grant power to the boss or the HR department. It also envisions how workers might benefit from such monitoring software by getting feedback about their behavior directly, so that they could use it as a self-improvement tool. The patent even suggests privacy options that would allow employees to decide what gets monitored. A cunning employer might even go further by setting up a social system with worker-assigned identification numbers, so that employees could anonymously compare themselves to colleagues in the office. Such a "gamification" system could provide workers with benchmarks for comparing their own performance scores, spur some motivational competition, and perhaps even dole out rewards for better behavior.

No evidence exists that Microsoft plans to actually develop such technology based on the patent, if it gets approved. But, if not Microsoft, there's a good chance that someone will try it out eventually.

Editor's Note: This article was corrected to reflect the fact that Microsoft has filed a patent, rather than having an approved patent.