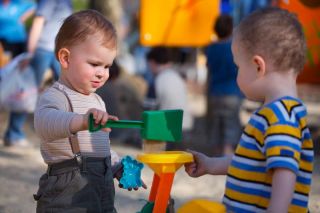 Children who used more spacial terms, such as tall and wide, were more likely to have caregivers who used those terms more often as well.
(Image: © Dreamstime)

When parents describe the size and shape of objects to their preschool children and the kids then use those words in their day-to-day interactions, the children later perform much better on spatial skills tests, a new study shows.

The study involved 52 children, ages 14 months to 46 months, along with one of each child's primary caregivers (mainly the mothers). During nine 90-minute sessions at four-month intervals, the researchers video-recorded the caregivers and children as they engaged in their normal, everyday activities.

The researchers then analyzed the children's and their parents' use of words related to spatial concepts, including shapes like circles or triangles, and the size of objects, such as tall and wide. They also noted the use of words that were descriptive of spatial features, such as corner, bent and edge.

The study's findings showed a great variation in the number of spatial words used by caregivers, with parents using a range of five to 525 spatial words during the combined nine recording sessions. On average, the parents used a total of 167 words related to spatial concepts.

Among the children, the use of spatial words ranged from four to 191 words during the study period, with an average of 74. The researchers also found that the children who used more of the terms were more likely to have caregivers who used those terms more often as well.

When the children were 4 1/2 years old, the team tested their spatial skills, including: the ability to rotate objects in their minds rather than just physically, copy block designs or match objects with similar sizes or shapes. In the spatial analogy, or matching, task, for example, the children were shown four pictures and asked to select which of the pictures best depicted the same spatial relation to a main target picture.

Children who had been exposed to more spatial terms during the recorded sessions and had learned to use those words themselves performed much better on spatial tests than children who did not hear and speak as many of these terms. Specifically, for every 45 additional spatial words  the children heard and repeated during their "everyday activities," the researchers saw a 23 percent increase in their spatial test scores.

"Our results suggest that children's talk about space early in development is a significant predictor of their later spatial thinking," Susan Levin, a study researcher and University of Chicago psychologist, said in a statement.

Such spatial skills are important in understanding mathematics, science and technology, the researchers point out.

"This study is important because it will help parents and caregivers to better recognize and to seek opportunities that enhance children's spatial learning," said Soo-Siang Lim, director for the Science of Learning Centers Program at the National Science Foundation, which partially funded the study.

The study is published in the current issue of the journal Developmental Science.