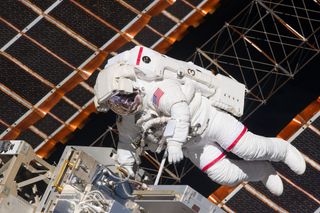 NASA astronaut Andrew Feustel, STS-134 mission specialist, participates in the mission's firstspacewalk on May 20, 2011 as construction and maintenance continue on the International Space Station. A recent study, conducted on rats, may explain why pilots and astronauts often get disoriented. It suggests the brain's "map" of space is relatively flat; it's rich in detail on only one plane, the environment around us to the right and left, but it doesn't hold much information on up-and-down movement through space.
(Image: © NASA)

With every step you take, your brain is making a mental map of the environment. But new research suggests our mapmaking brain cells aren't good at encoding information on where a person is oriented within up-and-down space.

The study, conducted on rats, may explain why pilots and astronauts often get disoriented, suggests the brain's "map" of space is relatively flat; it's rich in detail on only one plane, the environment around us to the right and left, but it doesn't hold much information on up-and-down movement through space. (Rats are often used as a surrogate for brain-mechanism studies because their brains are very similar to ours, so the results likely apply to humans.)

"The implication is that our internal sense of space is actually rather flat — we are very sensitive to where we are in horizontal space but only vaguely aware of how high we are," study researcher Kate Jeffery, of University College London, said in a statement. "This finding is surprising, and it has implications for situations in which people have to move freely in all three dimensions — divers, pilots and astronauts for example.

In an email to LiveScience, Jeffery added: "It may at least partly explain the propensity for pilots, astronauts and divers to become easily disoriented in 3-D space. In pilots, this famously happens if they lose visual contact with the world (e.g. in thick cloud), but it is even more the case with astronauts, and to some extent deep-sea divers, where the usual cues to 'up' and 'down' become unavailable."

Two types of brain cells, called grid cells and place cells, make these mental maps. The grid cells are turned on periodically as a  person walks around, marking out distances as the individual moves through the environment. The place cells encode specific places in the environment, marking certain landmarks.

When they were navigating through three dimensions, the mental map created by the distance-sensing grid cells was unaffected, meaning the grid cells only paced out distances in the horizontal plane. The grid cells didn't fire at regular intervals as the rats moved up and down in space.

The researchers did notice a slight response from the place cells, though. The cells corresponding to certain vertical locations did fire while the rats were walking up and down, recording new places in vertical height, though they were less sensitive than those corresponding to points along a horizontal surface.

The small responses of these space-mapping brain cells linked to changes in vertical location suggest the mammalian brain can understand changes in height, but a complex three-dimensional map is not generated.

"It seems likely that the map of space isn't a volumetric map (like, say, a 3-D brain atlas, where everything is specified in x-y-z coordinates), but more like a bunch of flat maps pasted together," Jeffery told LiveScience in an email. "It's entirely possible that there is a height signal somewhere, and maybe even a rather accurate one, but it doesn't seem to be integrated with the flat map."

The study was published today (Aug. 8) in the journal Nature Neuroscience.