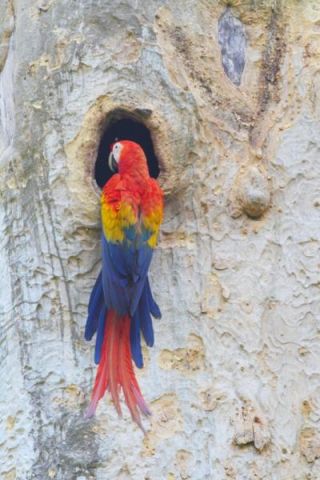 One endangered parrot species just got a major boost: A whopping 20 scarlet macaw fledglings have now taken flight over the forests of Guatemala.

Scarlet macaws, one of the world's largest parrot species, are at threat from destruction of their habitat and poaching for the pet trade. An estimated 95 percent of the scarlet macaws in Guatemala live in the Maya Biosphere Reserve.

Conservationists with the Wildlife Conservation Society and the National Park Service of Guatemala run a monitoring program focused on helping weak and at-risk chicks — some of which were removed from tree cavity nests and hand-reared in a jungle hospital — with guidance from the Bronx Zoo's Department of Ornithology and veterinarians from the Global Health Program.

The rehabilitated chicks are then fostered back in nests with chicks of the same age, a procedure that greatly increased the chances of survival for these rare birds.

Monitoring scarlet macaw nests is not for the faint of heart. Researchers need to be able to climb trees — often with the aid of rappelling lines nearly 100 feet (30 meters) above the canopy floor — to inspect nests, mount video cameras, and sometimes remove sick chicks from the nesting cavities.

The newly fledged birds are a big success for conservationists working on the program; they were hoping to record at least one fledgling from each of 24 monitored nests during the 2011 season.

With a total estimated population of some 300 scarlet macaws in the country, each successfully fledged bird is critical for the survival of the species. The bumper crop of fledglings in the 2011 season stands in stark contrast to the 2003 season that registered only one fledgling from 15 nests.

"The success in increasing the nesting success of scarlet macaws through intensive chick management and fostering is a great step forward for macaw conservation," said Rony Garcia, a conservationist with the Wildlife Conservation Society. "We believe the lessons learned can not only help save the scarlet macaw in Guatemala, but be extended to help other threatened species of parrots and cavity nesters across the globe."