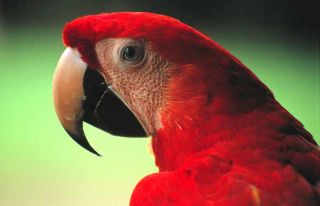 A Scarlet Macaw (Ara macao). The closest relatives of songbirds, encompassing more than half of all avian diversity, have long been debated. A new study shows songbirds are closest to parrots.
(Image: © image courtesy of Robert Luecking)

Having a big brain can open all kinds of doors, even evolutionary ones, it seems.

First formulated in the 1980s, the "behavioral drive" hypothesis posits that intelligence can influence the course of evolution. The idea is that intelligent animals can find ways to exploit new foods and new habitats, thus exposing themselves to new selection pressures. So, if the species in a given taxonomic family have large brains relative to their body size, they should also have widely divergent body sizes, among other traits, as a result of varied selection pressures.

Daniel Sol of the Autonomous University of Barcelona and Trevor D. Price of the University of Chicago tested that prediction on birds. They extracted data on 7,209 bird species from the scientific literature, and found many examples of bird families that are both brainy and quite diversified in body size, such as the crows, the woodpeckers, the hornbills, and the parrots.

Comparing all avian families, Sol and Price showed statistically that brain size explains 12 percent of the variation in body size. The percentage may be small, but it confirms the theory that in evolution, behavior is more than just the result of selective pressures; it can also alter those pressures.

The findings were detailed in The American Naturalist.