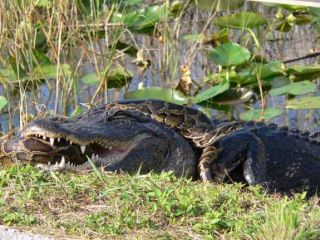 A native American alligator squares off against an invasive Burmese python. These pythons are among the 56 non-native species established in the state, largely thanks to the pet trade, according to scientists.
(Image: © Lori Oberhofer, National Park Service)

Florida is now officially the world capital for invasive and potentially invasive reptiles and amphibians, according to a 20-year study verifying that 56 non-native species of these animals have become established in the sunshine state.

The accommodating climate — which can suit not only tropical and subtropical specie, but those adapted to colder climes —is an element in the problem, according to Kenneth Krysko, the lead researcher and a senior biological scientist at the Florida Museum of Natural History, the University of Florida.

But he and the other researchers put the bulk of the blame on the pet trade, which they say is responsible for the vast majority of introductions, and impotent laws meant to prevent the release of non-natives. [Image Gallery: Invasive Species]

It's impossible to have this many non-native species establishing themselves without consequences, Krysko said.

One of the most prominent of these new residents is the Burmese python, which appears to be a refugee of the pet trade. Officials worry they pose a threat to humans, as well as to native, endangered species, which turn up in the pythons' stomachs.

According to the researchers' list, the Burmese is one of six python species that have been introduced to Florida, all by the pet trade, and one of two that has become established, meaning it has survived and reproduced in its new habitat.

The introductions began in 1863 with the greenhouse frog, a native of the Caribbean, which appears to have hitched a ride with shipping cargo. Since then, 136 more non-natives have been introduced and three intercepted before they reached the wild,Krysko and his colleagues find. In the decades that followed, cargo stowaways were the dominant introductions. But in the 1970s and 1980s, the demand for exotic pets increased. The pet trade is now accountable for 84 percent of introductions, they calculate. [America's 10 Favorite Pets]

The researchers confirmed the introductions of all known nonnative reptiles and amphibians through their own fieldwork and by looking at specimens in museum collections, photographs and results from previous research. For each, they included the time of its introduction, the pathway by which the species was introduced and its status.

Releasing a nonnative species without a permit is illegal in Florida, but the law requires an officer with the Florida Fish and Wildlife Conservation Commission to observe someone releasing the animal in order to cite them, according to Krysko. Not surprisingly, no one has been prosecuted, he said.

In a study published in the journal Zootaxa on Sept. 15, the researchers encourage the creation of an early detection and rapid response program to quickly identify newly found introduced species so they can be eradicated.