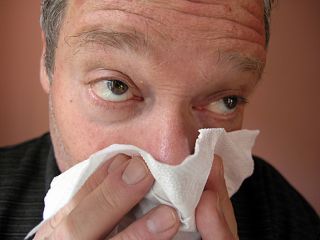 The viruses that cause seasonal flu epidemics appear to be globe trotters.
(Image: © dreamstime.com)

In the Northern Hemisphere, flu season has begun, but, contrary to what scientists once thought, the viruses that arrive with the winter cold aren't making an annual journey from year-round homes in Southeast and East Asia.

Rather, their origins are likely to be more complicated, indicates new research.

The viruses that arrive during flu seasons in the temperate north and south appear to have no single source, the study indicates. Instead, annual flu epidemics appear to be fed by viruses circulating the globe, following itineraries that would make the most accomplished travelers jealous.

"What we found was that the virus moves between populations of humans and causes epidemics. Viruses may then be transmitted to other regions and trigger other epidemics in those places where conditions are suitable," wrote lead researcher Justin Bahl, a researcherat the University of Hong Kong and Duke-National University of Singapore Graduate Medical School, in an email to LiveScience.

In fact, the seasonal viruses studied appeared to be part of one globally distributed population — a metapopulation.

In the U.S., this annual rite can begin as early as October, and it typically peaks in January and February, according to the U.S. Centers for Disease Control and Prevention.

Vaccines are prepared to prevent infections by the types of influenza viruses expected to attack. These seasonal epidemics are caused by human influenza A and B viruses. Influenza A viruses are broken down into subtypes based on the proteins on the surface of the virus.

This year, the World Health Organization recommended that vaccines in both hemispheres defend against strains belonging to two types of Influenza A, H1N1 and H3N2, as well as a strain of Influenza B.

The new research looking at the origin of flu epidemics focused on H3N2. Bahl wrote he would expect to see similar results for H1N1 and Influenza B.  [How Do Vaccines Work?]

"I don't think our results are exceptional for influenza only," he said. "I think such dynamics may play a role in other disease."

A virus without a home

Bahl and an international team of researchers studied the global dynamics of H3N2 viruses from 2003 to 2006 by sequencing 105 viral genomes from Hong Kong, representing East Asia, and analyzing them along with sequences from viruses collected in countries around the world. They included samples from seven global regions, and used the genetic relationships among them to understand the viruses' travels.

In temperate locations, such as New York, they found evidence that, while the viruses proliferated during seasonal outbreaks, they did not last long, as the season came to an end. In the more tropical climes, Hong Kong and the Southeast Asian countries, the viruses appeared to stick around longer, but had low levels of genetic diversity, indicating that they, too, were dying out.

This was unexpected, since a virus source population is expected to maintain higher levels of diversity than regions where epidemics are occurring, according to Bahl.

In another analysis, the team concluded that no single location had seeded every outbreak in a given year. Instead, they found evidence that the viruses traveled to multiple regions each year.

For example, in 2005, New York's flu epidemic appears to have originated in Australia and Southeast Asia. From New York, the virus then appears to have spread to Europe, and from there, to Japan.  The team found no evidence that the European and Japanese epidemics of 2005 had come from Southeast Asia or Hong Kong.

They found that viral populations in Hong Kong and Southeast Asia were reseeded from elsewhere, and that the temperate regions in the Southern and Northern hemispheres, with their complementary flu seasons, can directly infect one another.

Maps of the reconstructed viral migrations around the world resemble the paths of international airline flights.

"I think that modern mass transportation has greatly affected the evolution and ecology of influenza viruses," Bahl wrote. However, he declined to speculate on how the virus migrated before the advent of modern transportation.

"The factors surrounding how and when an outbreak occurs and the factors that allow for effective transmission (i.e. absolute humidity/temperature) are still poorly understood," he wrote.

The study was published today (Nov. 14) in the journal Proceedings of the National Academy of Sciences.