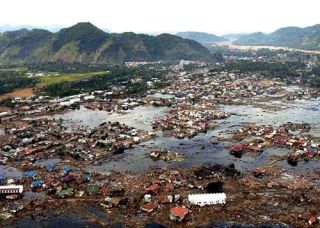 The death toll from the devastating 2004 Indonesia tsunami might have been lower had there been enough coastal vegetation to dull the blow, scientists suggest in a new study.

"The recent events in Japan and the February 2010 earthquake in Chile show that these threats continue to be real and require preparedness," researcher Georg Cadisch, an agronomist at the University of Hohenheim in Stuttgart, Germany, told OurAmazingPlanet.

Past research suggested that coastal vegetation in the form of mangrove forests or rubber plantations could in principle serve as "bioshields" against tsunamis, blunting their impact by dissipating the energy of the onrushing killer waves, reducing flooding and thus human casualties and property damage. However, "many previous studies advocating bioshields have been criticized for lacking empirical evidence," Cadisch said. "Unsubstantiated statements regarding protection provided by coastal vegetation can be obstructive and even dangerous, providing a false sense of security."

To learn more, Cadisch and his colleagues developed computer models simulating the potential defensive effects of coastal vegetation against tsunami waves over a distance of 60 miles (100 kilometers) along the west coast of the Aceh region of the Indonesian island of Sumatra, the point of land closest to the epicenter of the deadly 2004 Indian Ocean earthquake. The models took into account factors such as coastal topography, wave height and tree width and height.

"For the first time, we were able to quantify the mitigation potential of coastal vegetation, particularly cultivated trees, on the impact of a very large tsunami," Cadisch said.

Grimly, the models suggested that having a dense forest directly behind a village increased casualties by up to 6 percent, findings corroborated by eyewitness accounts from the tsunami, researchers said. "This was probably due to vegetation slowing down people while they tried to escape," Cadisch explained.

Debris from such forests probably added to backwash material that slammed into people by the shore, he added. Instead of dense vegetation behind settlements, "it might be better to have open fields, annual crops and escape routes," Cadisch said.

The scientists did caution that bioshields apparently had only limited effectiveness against large tsunamis. "Additional appropriate risk-mitigation actions such as early warning systems need to be implemented," Cadisch stressed. "Only a combination of these measures will provide hazard reduction and mitigation." [Related: History's Biggest Tsunamis]

Coastal vegetation should ideally serve as something more than bioshields, especially if they are to enlist local interest and support to become sustainable projects.

"Trees can provide multiple benefits: fruits, wood, soil fertility enhancement and environmental services; biodiversity, reducing greenhouse gas emissions and environmental pollution; and can be well-combined with food crops to enhance food security and human welfare," Cadisch said. "In order to be successful they must be accepted by local people and must fit their culture."

The scientists' findings were detailed online today (Nov. 7) in the Proceedings of the National Academy of Sciences.