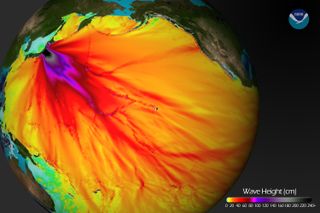 The 8.9-magnitude (which may have been upgraded to a 9.0) earthquake that struck Japan triggered tsunamis across the region. Here, results from a computer model run by the Center for Tsunami Research at the NOAA Pacific Marine Environmental Laboratory show the expected wave heights of the tsunami as it travels across the Pacific basin. The largest wave heights are expected near the earthquake epicenter, off the coast of Sendai, Honshu, Japan. The wave will decrease in height as it travels across the deep Pacific but grow taller as it nears coastal areas. In general, as the energy of the wave decreases with distance, the near-shore heights will also decrease. For example, coastal Hawaii will not expect heights of that encountered in coastal Japan, according to NOAA.
(Image: © National Oceanic and Atmospheric Administration (NOAA))

Scientists in California got an early look at the tsunami generated by the massive earthquake in Japan as it rippled across the Pacific Ocean.

The March 11 Japan tsunami was picked up by high-frequency radar in California and Japan as it swept toward their coasts, according to U.S. and Japanese scientists. This is the first time a tsunami has been observed by radar, raising the possibility of new early warning systems.

"It could be really useful in areas such as southeast Asia where there are huge areas of shallow continental shelf," said John Largier, an oceanographer and study team member from the University of California, Davis. The continental shelf is the perimeter of a continent that is underwater and gradually descends to the ocean floor.

Largier and his colleagues have been using a high-frequency radar array at their lab to study ocean currents for the last 10 years. Together with collaborators from Hokkaido and Kyoto universities in Japan and San Francisco State University, the researchers used data from radar sites at Bodega Bay and Trinidad, Calif., and two sites in Hokkaido, Japan, to look for the tsunami offshore.

The radar detection is the latest in the string of new ways the Japan earthquake and tsunami were observed.Satellite images found that the tsunami was so powerful that it broke off huge icebergs thousands of miles away in the Antarctic. Scientists also found that the earthquake rattled the planet's upper atmosphere.

In the new study, scientists noticed that the radar picks up not the actual tsunami wave — which is small in height while out at sea — but changes in currents as the wave passes.

The researchers found they could see the Japan tsunamionce it entered shallower coastal waters over the continental shelf. As the waves enter the shallower water, they slow down, increase in height and decrease in wavelength until finally hitting the coast.

The continental shelf off California is quite narrow, and approaches to the coast are already well-monitored by pressure gauges, Largier said. But he said radar detection could be useful, for example, on the East Coast or in Southeast Asia, where there are wide expanses of shallow seas.

The study was published in the August edition of the journal Remote Sensing.