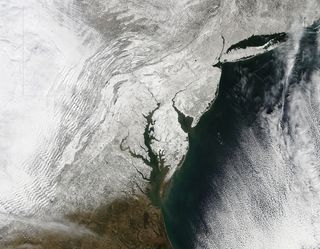 A satellite snapped this image of the U.S. East Coast buried in snow on February 11, 2011, after a series of storms that researchers have linked to changes in the jet stream and warm ocean waters.
(Image: © NASA MODIS Rapid Response Team/Jeff Schmaltz.)

Warmer waters in the Atlantic Ocean can stall weather systems over North America, forcing them to linger over one spot longer than usual and pound the area with snow, rain — or the lack thereof, in the case of drought conditions — a new study finds.

The slow-poke weather systems are held up by changes in the jet stream — a fast-flowing air current traveling around the Earth high in the atmosphere — which can pinch off large masses of air from the normal wind flow for an extended period. These kinks in the jet stream typically last at least five days but can persist for weeks, and are known as blocking events.

In the North Atlantic, atmospheric blocking centers generally form over Greenland and Western Europe. A blocking event that took place over Greenland in the winter of late 2009 and early 2010 ultimately led to intense blizzards in the eastern United States, in an episode popularly known as Snowmageddon.

A team of researchers led by Sirpa Häkkinen, an oceanographer at NASA's Goddard Space Flight Center in Greenbelt, Md., analyzed atmospheric data from the 20th century and found a correlation between periods of warmer-than-usual waters in the North Atlantic, and a higher frequency of blocking events.

The team removed the effect that global warming has on water temperatures, and found that blocking events occurred up to 30 percent more often from the 1930s to the 1960s and during a period that started in the late 1990s to the present, all times when the North Atlantic Ocean was warmer than usual.

At first, the researchers thought the increase in blocking events might be caused by a fluctuating climatic phenomenon known as the North Atlantic Oscillation (NAO), which affects atmospheric pressure and influences weather patterns.

"The NAO is the usual suspect for all atmospheric changes in the Northern Hemisphere," Häkkinen said in a statement.

However, it turns out the NAO has been essentially neutral since 1996, yet the blocking events have continued, especially since 2000.

In addition, the researchers found that these blocking events can even alter ocean currents.

Clusters of blocking events can divert the normal track of hurricanes crossing the Atlantic, which in turn can alter the twisting motion that the wind has on ocean waters. In some cases, this change can speed up or slow down large, circulating currents in the ocean known as gyres, which can have far-reaching effects.

"These warmer and more saline waters then invade the sub-polar ocean and cause a series of impacts," Peter Rhines, an oceanographer at the University of Washington, Seattle, and co-author of the new study, said in a statement. "They erode the base of glaciers, contributing to the melting of the Greenland ice sheet. And the change in temperature and freshness of the waters can alter sub-polar ecosystems, too."

The researchers said a better understanding of the connection between cyclical climatic phenomena and blocking events could help improve the accuracy of weather forecasts and seasonal predictions.

"Knowing that there's going to be a potential for more blocking events causing more snowfall would not only help people prepare better for the winter," said Häkkinen, "it would be useful with water resources management."