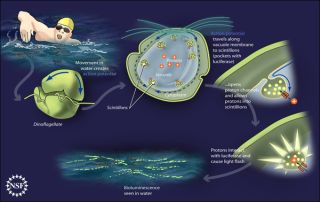 Proposed bioluminescence mechanism: When a dinoflagellate is mechanically agitated, an electrical impulse travels around its vacuole membrane. This impulse opens up proton channels that allow protons to flow from the vacuole into the scintillons, where they activate light-emitting luciferase proteins. The result: A flash of light.
(Image: © Zina Deretsky, National Science Foundation)

Scientists may have an explanation behind the rare nighttime events in which the ocean glows bright blue as far as the eye can see in all directions.

A new study details a process in plankton that would potentially account for this widespread bioluminescent phenomenon, which was confirmed by satellites in 2005 (see above image).

Scientists already knew that tiny, unicellular plankton called dinoflagellates create the distinctive blue flashes in some waters. How they flash their blue light was less clear.

A key aspect of the potential mechanism for bioluminescence in dinoflagellates involves voltage-gated proton channels — channels in membranes that can be opened or closed by chemical or electrical events.

According to the study, here is how the light-generating process in dinoflagellates may work: As dinoflagellates float, mechanical stimulation generated by the movement of surrounding water sends electrical impulses around an internal compartment within the organism, called a vacuole, which holds an abundance of protons (positively charged particles). These electrical impulses open voltage-sensitive proton channels that connect the vacuole to tiny pockets dotting the vacuole membrane, known as scintillons.

Once opened, the voltage-sensitive proton channels may funnel protons from the vacuole into the scintillons. Protons entering the scintillons then activate luciferase — a protein stored in scintillons that produces flashes of light. The flashes would be most visible during blooms of dinoflagellates, when the tiny creatures rapidly reproduce and cover a larger area of sea. (Some of these blooms produce toxins that are harmful to other creatures in the marine environment, as well as to humans.)

The study appears in the Oct. 17 issue of the journal Proceedings of the National Academy of Sciences (PNAS).