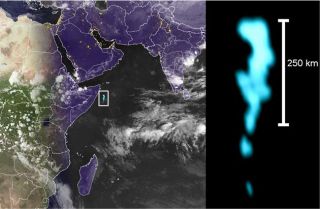 The "milk sea" in a composite satellite image, and the region of the ocean where it was spotted.
(Image: © Steven Miller, NRL)

Mariners have long told of rare nighttime events in which the ocean glows intensely as far as the eye can see in all directions.

Fictionally, such a "milky sea" is encountered by the Nautilus in Jules Verne classic "20,000 Leagues Under the Sea."

Scientists don't have a good handle what's going on. But satellite sensors have now provided the first pictures of a milky sea and given new hope to learning more about the elusive events.

The newly released images show a vast region of the Indian Ocean, about the size of Connecticut, glowing three nights in a row. The luminescence was also spotted from a ship in the area.

"The circumstances under which milky seas form is almost entirely unknown," says Steven Miller, a Naval Research Laboratory scientist who led the space-based discovery. "Even the source for the light emission is under debate."

Scientists suspect bioluminescent bacteria are behind the phenomenon. Such creatures produce a continuous glow, in contrast to the brief, bright flashes of light produced by "dinoflagellate" bioluminescent organims that are seen more commonly lighting up ship wakes and breaking waves.

"The problem with the bacteria hypothesis is that an extremely high concentration of bacteria must exist before they begin to produce light," Miller told LiveScience. "But what could possibly support the occurrence of such a large population?"

One idea, put forward by the lone research vessel to ever encounter a milky sea, is that the bacteria are not free-living, but instead are living off some local supporting "substrate."

"This previous excursion reported the presence of bioluminescent bacteria, which were found to be living in association with an algal bloom," Miller explained.

"So, our best working hypothesis is that we are witnessing bioluminescence produced by bacteria that are colonizing some kind of organic material present in the water," he said. "Satellite detection will hopefully allow us to target milky seas with properly equipped research vessels that will then be able to answer all these questions definitively."

The event occurred in 1995 and was finally analyzed and reported last week in the Proceedings of the National Academy of Sciences.

The mystery highlights how little scientists know about the ocean. Milky seas appear to be most prevalent in the Indian Ocean, where there are many trade routes, and near Indonesia.

"But there could be other areas we simply don't know about yet," Miller said. "In fact, we're already beginning to receive feedback from additional witnesses of milky seas. Some of these accounts occurred in regions we had not thought to look before, and we're currently working to find matches with the satellite data."