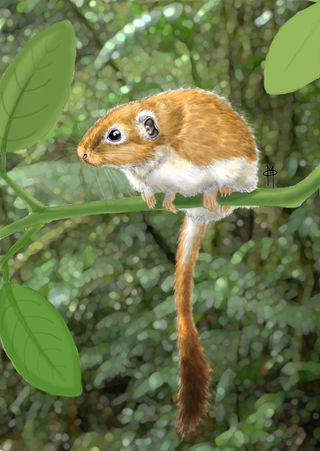 An illustration of the Canaanimys rodent, the first rodent to reach South America.
(Image: © Maëva Orliac 2011)

Ancient tropical South American forests were teeming with little rodents, similar in size to today's rats and mice. Now researchers have found traces of what may have been among the first rodents to infest South America: five tiny animals that lived more than 41 million years ago.

The study's estimates, based on fossils of the rodents' teeth, suggest the little guys had just rafted over from Africa.

The animals, which include representatives of three previously unknown species, are called caviomorphs, a group of rodents distantly related to today's guinea pigs and chinchillas. They would have been about the size of a mouse or rat.

"These rodents were not only the oldest ones in South America, due to their age, but also they were really African-like, so we could consider them as the earliest caviomorph rodent," study researcher Pierre-Olivier Antoine, of the University of Montpellier in southern France, told LiveScience. The find provides "crucial information about the timing and pattern of arrival and dispersal of such rodents into South America."

The specimens were discovered along the Cachiyacu River in northern Peru. The scientists didn't have to dig down to discover the past; because of the river's geology, they could walk downstream to go back in time and upstream to go forward. Essentially, the layers of rock, including the layer where the fossils were found, had been pushed up into an arch-shaped fold, turning vertical layers into horizontal ones.

At the time the specimens were deposited, the area would have been a lush tropical forest, probably rich in animal life. Near the rodent fossils, the researchers discovered remains of crawfish, reptiles and crocodiles, other mammals, opossum-like marsupials and even an armadillo. [See images of the little rodent]

The rodent specimens are at least 10 million years older than those of the previous oldest rodent found in South America. Those later rodents were quite a bit larger than those discovered by Antoine and his crew. The new specimens "turned out to be pretty interesting because of the morphology and small size," Antoine said. "These rodents already have the dental signature of the South American rodents that live today."

"They were just the first immigrants into South America from Africa," he said.

The immigration seemed to happen during a relatively warm and wet period, not during the cooling period previously suggested.

As for how the furry immigrants made the trek from their African homeland, other scientists have estimated that a rodent on a raft made of vegetation could have reached northeast Brazil in one to two weeks, the researchers noted.

The study was published today (Oct. 11) in the journal Proceedings of the Royal Society B: Biological Sciences.