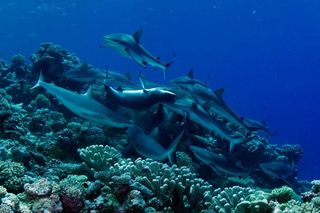 A shark feeding frenzy on a reef at the Marshall Islands.
(Image: © © Luizrocha | Dreamstime.com)

The world's largest shark sanctuary has opened in a place that few people have even heard of — the Marshall Islands.

The Marshall Islands is a Micronesian nation of atolls and islands in the middle of the Pacific Ocean. Their new shark park is so big that all of Mexico could fit within its boundaries, reported the environmental news site Mongabay. New legislation created the reserve by outlawing commercial shark fishing in the islands' 700,000 square miles (2,000,000 square kilometers) of ocean.

The new law also forces those who accidentally catch sharks to release them. Selling sharks or shark parts on the islands is also now illegal.

"We salute the Republic of the Marshall Islands for enacting the strongest legislation to protect sharks that we have seen," said Matt Rand, director of global shark conservation for the Pew Environment Group, in a statement. The Pew Environmental Group is a part of a group that is working to establish shark parks around the world. "As leaders recognize the importance of healthy shark populations to our oceans, the momentum for protecting these animals continues to spread across the globe."

Worldwide, shark populations have declined steeply in recent years, with many of the marine creatures falling victim to overfishing for their valuable fins. Shark fins fetch high prices as a prized ingredient in shark fin soup. Shark finning, the act cutting off a shark's fin, has killed about 38 million sharks per year between 1996 and 2000, according to Mongabay.

The Marshall Islands aren't alone in attempting to protect sharks.

"The Marshall Islands have joined Palau, the Maldives, Honduras, the Bahamas and Tokelau in delivering the gold standard of protection for ensuring shark survival," Rand said. "We look forward to helping other countries enlist in this cause."

The Marshall Islands' new legislation includes fines of between $25,000 to $200,000 for anyone found to be fishing for sharks or in possession of shark fins.