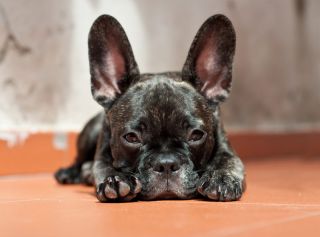 Bijou is an 18-month-old French bulldog (like the one shown here) found to have a penis bone within her clitoris. She baffled scientists because she does not have the genetic abnormality that typically causes genetically female dogs to develop male sexual features. Bijou's owner declined to have photos of the dog released.
(Image: © Matteo Dini | Shutterstock)

Bijou, an 18-month old, healthy and well-behaved French bulldog has an abnormally large clitoris, so large that her owner brought her to the Université de Montréal Faculty of Veterinary Medicine to find out what was going on.

Examinations revealed that Bijou has what appears to be an undeveloped prostate gland, as well as deteriorated testis and a penile bone — called a baculum it is present in male dogs' penises — inside her large clitoris.

A genetic analysis revealed a mystery: Bijou is a genetically female dog, but she does not have the genetic abnormality that can cause some female mammals to develop testicles and other male features. [Gallery: Stunning She-Males of the Animal World]

Like female humans and other female dogs, Bijou has two X chromosomes, meaning genetically she is female. Males, meanwhile, have an X and a Y. The Y chromosome contains a gene, called SRY for sex-determining region Y gene, which is responsible for testes formation. Testes release hormones that prompt the development of male features.

Among humans, dogs and other mammals, an error during sperm formation causes the SRY gene to end up attached to an X chromosome instead of a Y. If this abnormal sperm fertilizes an egg, which always carries an X, then the female offspring that result will develop some male sexual features. In humans, this anomaly occurs in one of 20,000 births, according to the Université de Montréal.

But this is not the case for Bijou.

"She is a female with two X chromosomes and testicles despite the absence of the SRY gene," said David Silversides, a professor at the Université de Montréal who diagnosed Bijou at the veterinary genetics laboratory.

Her case is not completely unique; the SRY gene is absent in 20 percent of hermaphrodite cases, according to Silversides. Bijou is the second bulldog diagnosed with this condition.

A French bulldog called Tana became the first after being brought to the vet for a routine vaccination. Her large clitoris — measured at just under half an inch (0.8 centimeters) long — tipped specialists off. It too was found to contain a penile bone, which doctors later removed surgically because it predisposed the dog to urinary tract infections. [The Weirdest Animal Penises]

Spanish scientists announced that Tana was genetically female, but SRY-negative, in a study published online in April 2010 in the journal Reproduction in Domestic Animals. Cases of genetically female animals with male sexual traits that lack the SRY gene have also been reported among pigs, horses, goats and about 20 dog breeds, as well as humans.

"In goats, we know the gene at the source of these malformations, but we are completely ignorant about the process in other species including humans," Silversides said. [Strange Birds Present Gender-Bending Mystery]

In the reverse case, when a genetically male animal has a Y chromosome that lacks the SRY gene, the animal will have sterile female genitalia, so the SRY gene appears necessary for the formation of male features. So, cases like Bijou's and Tana's present a baffling exception.

Silversides hypothesizes that a recessive gene handed down by both parents could be responsible. (For a recessive trait to become apparent, an individual must receive two copies of the gene, one from each parent.)

However, to determine if this is indeed the case, it would be necessary to analyze the genes carried by Bijou's parents and her siblings, which requires help from breeders.

"Unfortunately, the breeders aren't very cooperative in such situations and our efforts have been unsuccessful," Silversides said.