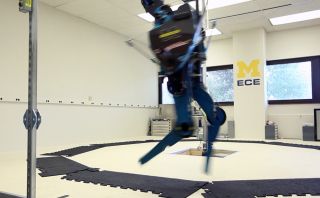 The bipedal robot MABEL runs more quickly and smoothly than any robot of its kind.
(Image: © Marcin Szczepanski, University of Michigan)

Recently, a team of researchers at the University of Michigan, in Ann Arbor, made a robot run like a human.

The robot is MABEL and "her" accomplishment represents the height of agility for a two-legged machine. MABEL runs as fast as 6.8 miles per hour, and we believe her to be the world's fastest bipedal robot with knees.

The project has been led by Jessy Grizzle, professor of electrical engineering in the Department of Electrical Engineering and Computer Science at the University of Michigan. "I've been studying robotic locomotion for many years, and I've never seen a machine do anything like this," he said. "It was surprising even to me."

Though a bit noisy, as is obvious in the video, MABEL runs quite gracefully. The robot has both feet in the air for 40 percent of each stride — like a real runner — and her feet are lifted quite high off the ground for a robot. For example, whereas most other robots lift their feet about one sixth of an inch off the ground, MABEL's feet are three to four inches in the air as she runs around the track.

MABEL was built with the support of National Science Foundation funding in 2008 in collaboration with Jonathan Hurst, who was then a doctoral student at the Robotics Institute at Carnegie Mellon University. Since that time, and most recently, University of Michigan Ph.D. students Koushil Sreenath, Hae-Won Park and Alireza Ramezani have been advancing the state-of-the-art in feedback control design to make strides in MABEL's ability to walk, navigate bumpy terrain and run, as seen in the video below.

This video shows MABEL's first attempt to walk over uneven ground. In the course of the experiment, MABEL trips and falls. She received many get well wishes from viewers. Credit: Hae-Won Park, Koushil Sreenath, Jessy Grizzle: University of Michigan College of Engineering

It is the highly complex and unique feedback algorithms, combined with a detailed model of the robot by Sreenath, Park, Ramezani and earlier graduate researchers including Ioannis Poulakakis, that support MABEL's feedback control system and make MABEL an efficient walker in terms of energy use — as well as a very agile walker and runner.

Design of the robot

MABEL was designed to mimic a human's weight distribution, and has springs that act like tendons in the human body. The robot weighs-in at 143 pounds (65 kilograms), and like a human, most of the weight is concentrated in the upper half of the body. That keeps the legs relatively light, so they can quickly move forward and backward for fast locomotion.

The springs in the robot serve two purposes. The first is to act as shock absorbers when the robot's legs strike the ground. To elaborate, running has a flight phase, where both feet are off the ground, and a stance phase, where one leg is on the ground. When a 143 pound robot like MABEL ends the flight phase by landing on one leg, the force is pretty large. The springs make the landing gentler, like shock absorbers in a car. This is similar to what the arch in your foot does for you, or a good pair of running shoes.

The second purpose of the springs is to store energy. This is analogous to a pogo stick or a trampoline — the robot bounces up and down on the springs, storing and releasing energy with each stride. That effect is an important aspect of all animal running (and hopping). MABEL appears to be the first robot with human-like morphology to be able to run in that way.

The key to MABEL's graceful gait and adept running style is the precisely tuned feedback controller.

A feedback controller is used to ensure that a system is accomplishing a desired goal by continually adjusting inputs when the system seems to be going astray. A simple example is a thermostat on a home furnace: When the house temperature falls below a certain point, the heat turns on.

The feedback controller in MABEL is making thousands of adjustments per second to keep her on her feet and keep moving her forward.

For feedback control aficionados: MABEL uses a nonlinear, compliant hybrid zero dynamics controller with active force control, running in real-time. How about that! That control framework has been developed over several years thanks to the support of National Science Foundation. The Hybrid Zero Dynamics framework was instrumental in the success of the running controller.

Some people who watch the video are surprised to see that MABEL is attached to a boom, and think that this somehow lessens the accomplishment. In fact, the next generation robot to come out of the research will be free standing, and he has already been named ATRIAS. Yet, ATRIAS will be able to one day walk and run only because of the decade of work done to this point to create MABEL and her predecessor, Rabbit.

ATRIAS is already being built by Hurst, who is now at Oregon State University. Once ATRIAS is built, the robot will be transported to Grizzle's lab during the summer of 2012. They hope to have the robot up and walking by the end of the year.

The next generation of students to take on the many challenges of ATRIAS is already being trained. Alireza Ramezani is learning his craft by training alongside Sreenath and Park as they work together on MABEL.

Stay in touch with the latest developments in bipedal robotics on Grizzle's Web page, and his group's YouTube channel.

Editor's Note: This research was supported by the National Science Foundation, the federal agency charged with funding basic research and education across all fields of science and engineering. Any opinions, findings, and conclusions or recommendations expressed in this material are those of the author and do not necessarily reflect the views of the National Science Foundation. See the Behind the Scenes Archive.