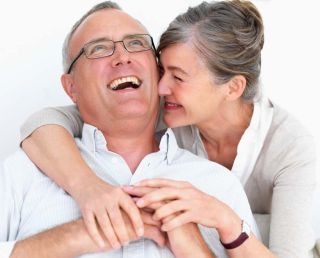 Baby boomers came of age in an era of unprecedented sexual freedom, when the birth control pill allowed women to control their fertility and sex talk became less taboo. But a new study finds that older women may still struggle with bringing up sex in the doctor's office. Instead, some prefer to turn to television personalities like Oprah alum Dr. Oz for sex advice.

The research came out of a small focus group in Florida, so more work is needed to find out how comfortable the baby boom generation as a whole is with talking about sex. But sexual health researchers have long suggested that adults need sex education, too. Given uneven sexual education over the years — and how modern sex-ed focused almost entirely on teens and college students — some older adults lack basic information about their bodies. And high rates of sexually transmitted infections (STIs) in retirement communities suggest that older adults aren't always aware of the need for protection once the risk of pregnancy is past, said Cynthia Morton, a professor of advertising who specializes in health communication at the University of Florida.

"Could it be that we have spent so much time focusing our efforts on 20-somethings and teenagers and maybe even 30-somethings that we are overlooking a group of people that are being defined more and more by the boomer generation?" Morton told LiveScience. "Aging is looking younger and younger."

Using fliers and word-of-mouth, Morton and her colleagues recruited a group of 27 women ages 50 and over for a focus group on "dating after 50." All of the women were sexually active and single, most through divorce. Only one participant had never been married.

The idea, Morton said, was to talk with the women about dating, sex and sexual health to help identify areas for future study. Single older adults are important, she said, because they are known to be at sexual risk. STIs, including HIV/AIDS, are increasing faster in those 50 and over than in any other age group, with the Centers for Disease Control and Statistics estimating that 10 percent of new AIDS cases each year occur in people over 50. [7 Ways the Mind and Body Change With Age]

The women in the focus group, however, tended to be well-aware of the need for protection during sex.

"I've got a great opener's line," one woman told the group. "My single cousin, who pretty much was a wild child … taught me a lot. Anyway, the opening line for the condom is, 'If you don't have a condom on you, I always carry a few in my purse.'"

Despite this take-charge attitude, several women expressed anxiety about bringing up sexual health issues with their doctors. One woman said she was embarrassed to see her doctor about a yeast infection, because she knew he also treated her ex-husband and was afraid of what the physician might think. Others said that their doctors never asked them about sexual health or volunteered any information.

"I think they just assume we know about it," one woman said.

Instead, the women reported turning to the Internet, women's magazines and Dr. Oz a cardiothoracic surgeon with a daytime personal health show, for information. Sue Johanson, a nurse and host of the late-night show "Talk Sex with Sue Johanson," was another source of information for the women.

The findings suggest that doctors need to be more proactive in talking with their older patients about sex, Morton said. She and her colleagues are now developing survey-based studies that can gather information from a larger sample of older adults to find out whether the focus group women were representative of their demographic. Ideally, those surveys will help uncover why women struggle with bringing up sex topics with their doctors, Morton said.

"If health communication experts and medical experts aren't aware or receptive," she said, "we could risk a senior epidemic of HIV, AIDS and STIs, just because we forgot to talk to them about those things."