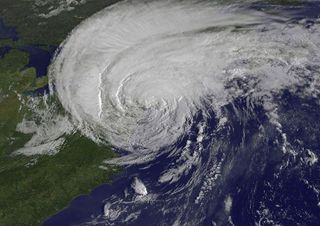 Satellites caught this view of Irene just 28 minutes before it made landfall in New York City as a strong tropical storm.

Flooding occurred in coastal and riverside areas of the city, and downed trees were reported in many spots around the city. Overall, though, Irene was not the worst case scenario it could have been for New York City.

The storm did still cause considerable damage all along the Eastern Seaboard and will surely become the 10th billion-dollar weather disaster for the United States in 2011.

The center of the storm was about 10 miles (20 kilometers) west of Danbury, Conn., and is causing flooding and other problems across New England. Irene's winds are down to 60 mph (95 kph).

A tropical storm warning is still in effect from Chincoteague, Va., up to Eastport, Maine.