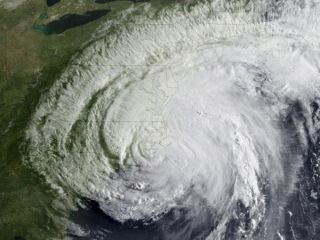 Irene is predicted to be the latest in 2011's string of billion-dollar weather disasters. But for New York City, Irene is not shaping up to be the worst-case scenario it could be.

The U.S. National Oceanic and Atmospheric Administration (NOAA) has forecast around 8 inches (20 centimeters) of rain for New York City from Irene. [Infographic: Storm Targets: Where the Hurricanes Hit]

The strongest winds and the highest storm surge are on a hurricane's right side — the "dirty side" — as viewed from above. That's because winds in a hurricane rotate counterclockwise, so the strength of the storm on the "dirty side" is the hurricane's wind speed plus its forward velocity. The strength on the "clean side", or the left side, is the wind speed minus the velocity.

The worst-case scenario for New York City would be a major hurricane (Category 3 or higher on the Saffir-Simpson scale of hurricane strength) that remains out to sea and then whose eye plunges ashore just west of the Hudson Bay, bringing the full fury of wind, surge and punishing waves of the storm's dirty side into Manhattan and the surrounding metro area. If that were to happen, a storm surge of up to 30 feet (9 meters) would flood low-lying areas, according to the New York City Office of Emergency Management.

Irene, however, has weakened to a Category 1 storm with winds of 85 mph (140 kph) and has taken a different track, with its eye so far looking to hit slightly to the east of the city.

"We could still be unlucky here in the city and get a worse track, but it's just hard to happen," said Adam Sobel, an atmospheric scientist at the Lamont-Doherty Earth Observatory.

The city, especially the borough of Manhattan, sits in a crook, somewhat shielded by Long Island and areas to the south.

"The good thing is that it's kind of hard for a hurricane to get in at that angle," Sobel told OurAmazingPlanet.

A hurricane needs warm water for fuel. Since Irene has been hugging the coast, making landfall over the North Carolina coast, the storm has been robbed of fuel and is not as strong as it would have been were it out to sea. [Hurricanes from Above: Nature's Biggest Storms]

Irene is also not racing north at 50-plus mph (80 kph), as did a 1938 storm that devastated Long Island. Irene is lumbering along at 15 mph (24 kph), dumping tropical storm conditions on the East Coast.

This is not to say Irene won't be devastating. Nursing homes and hospitals in vulnerable coastal areas of the city have been evacuated. City-wide transit service will shut down Saturday at noon as a safety precaution, as will five area airports.

But when all is said and done, meteorologists will look back at the damage in New York City and likely say, "It could have been worse."