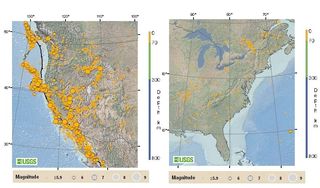 This map shows earthquakes with a magnitude greater than 3.5 that occurred between 1900 and 2009 along the east and west coasts of the U.S.
(Image: © USGS)

Reactions ranged from fright to amusement Tuesday as a 5.8-magnitude earthquake hit the East Coast, revealing post-9/11 fears as well as excitement surrounding a rare, and fortunately not deadly, event.

"Everyone calm down," Slate political correspondent John Dickerson wrote on Twitter. "If this is an earthquake on the east coast we're supposed to react ironically."

Many people did, propagating a wave of earthquake jokes on Twitter. Others were more alarmed.

"Two women were screaming," said Paige Furbush, an intern for Utah Senator Orrin Hatch who was on her second day on the job Tuesday. "A few people thought it was a bomb, so the majority of people in the Capitol were definitely panicked."

That range of reactions isn't unexpected, said Josh Klapow, a clinical psychologist at the University of Alabama, Birmingham, who specializes in disaster preparedness. People bring their own anxieties to an unexpected event, and interpretation matters, Klapow told LiveScience.

"The environment and the event set the stage, but it's people's minds, their cognitions, their thoughts that fill in the gaps," he said. "So if you're in D.C. in the Senate, if you feel a large jolt and earthquakes are not common, a common perception would be, 'Oh, it's something else. It's a bomb.'"

Many people reported an initial wave of shock and fear. Philadelphia resident Russ Bader said the shaking of his building reminded him of a "poltergeist attack."

"I was one of the lucky people who felt the earthquake and was majorly freaked out," Bader told LiveScience, adding, "Who would have known that I would ever feel an earthquake in Philly?" [Read: Why Virginia Quake Shook Entire Coast]

"I was really scared," New Yorker Karthin Patel, who experienced the quake from 1 Madison Ave., told LiveScience. "But I've felt earthquakes before, but from the second floor. Here it's the eighth floor. We would have to take the elevator, that death trap."

In New York, the quake seemed to bring back bad memories of the 9/11 attacks. Allison Bethell, 28, who owns a real estate company in Philadelphia, felt the quake in a park in New York City.

"People came rushing out of the buildings," Bethell told LiveScience. "I wondered what was going on. People in the buildings were wondering what it was, if it was another terrorist attack."

West coasters were often more relaxed about the quake. Yana Price, a student at Dickinson College in Pennsylvania, couldn't help but be amused at her friends' reactions to the quake on Facebook.

"See, I go to school in Pennsylvania, but originally I'm from California," Price told LiveScience.

Noticeable earthquakes are rare along the East Coast, especially compared with seismically active California. But you don't have to study up on earthquakes to be ready for one, Klapow said.

"We've really moved to what's called an all-hazards approach," Klapow said. Instead of urging people to prepare for individual disasters, public health officials recommend that everyone make a few basic preparations, no matter the risks in their area.

Knowing an emergency evacuation route for your home and workplace, having an out-of-state contact who can be in touch with relatives and friends if the phones in your areas are down and keeping a three-day stash of emergency food, water and first aid supply on hand will help in any emergency, from disease outbreak to hurricane, Klapow said.

"What those kind of things do besides preparing you practically or logistically is that psychologically, it's a huge help," Klapow said. "Giving yourself that sense of control will actually go a long way in reducing your anxiety, as well as potentially saving your life."

Editor's Note: This story has been updated to correct Senator Orrin Hatch's name.