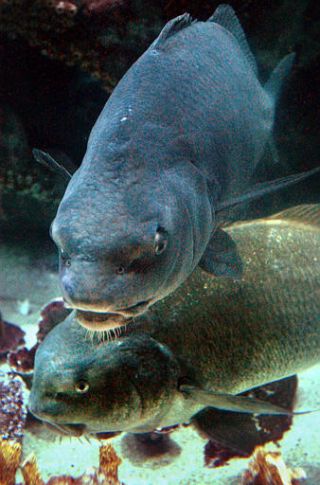 A deadly fish virus is approaching epidemic proportions in the Great Lakes and their neighboring waters, lining the beaches of Lake Erie with fish carcasses and threatening New York's $1.2 billion sport-fishing industry, a scientist says. The Great Lakes "viral hemorrhagic septicemia virus" (VHSV) poses no health threat to humans, but people should always avoid eating fish or game that looks or acts strangely. Not all infected fish, however, exhibit symptoms as they might be carriers and symptoms vary from species to species. The virus causes anemia and internal bleeding in fish, said Paul Bowser, Cornell University professor of aquatic animal medicine. So far, it has been identified in 19 species including gobies, shad and muskellunge (New York's No. 2 sport fish), he said. "It's pretty obvious this is an epidemic even if it isn't official," Bowser said in a prepared statement. "There are just so many species affected and so many mortalities." The virus was first identified in the Great Lakes Basin in 2005, and several related fish kills have since occurred in New York waters:

--in the St. Lawrence River, hundreds of thousands of round gobies have succumbed to the disease; --in Lake Ontario west of Rochester and in Dunkirk Harbor on Lake Erie, gizzard shad die-offs from VSHV have been reported; --and the beaches of Lake Erie have been piled high with millions of freshwater drum carcasses, all victims of VSHV.

Also, in the Lake Winnebago chain of inland lakes about 25 miles south of Green Bay on Lake Michigan, the Wisconsin Department of Natural Resources made a preliminary identification of the virus in local fish. Other species from the Great Lakes Basin area that have tested positive include bluegill, rock bass, black crappie, pumpkinseed, smallmouth and largemouth bass, northern pike, walleye, yellow perch, channel catfish, brown bullhead, white perch, white bass, emerald shiner, bluntnose minnow and burbot. The spread of the virus could affect the channel catfish trade, which constitutes about 80 percent of aquaculture business in the United States, Bowser said. Cornell experts have tested about 1,600 fish since May 2006. Infected marine fish off the Atlantic Coast could have sparked the virus' spread to the Great Lakes freshwater fish, Boswer said. Or the virus could have jumped from birds and mammals that prey on fish, anglers using infected bait minnow or contaminated fishing equipment. New York State and Wisconsin regulations and emergency rules have been put into effect to prevent some of these transmission routes by limiting the use of bait fish to the body of water where they were collected and requiring boaters to drain their boats before leaving a region's waters.