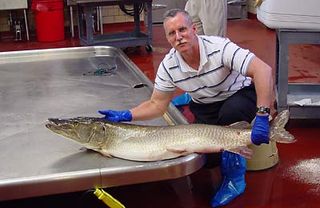 Paul Bowser, Cornell professor of aquatic animal medicine, holds a muskellunge found dead in the northeastern waters. The fish is one of many undergoing tests at Cornell to detect a deadly viral hemorrhagic septicemia virus (VHSV) spreading in the Great Lakes.
(Image: © Cornell University)

Meanwhile, hundreds of fish in Lake Ontario and the St. Lawrence River have died in recent weeks, but officials are not yet sure if the newfound virus is behind the kills.

Last week, an estimated 1,000 dead fish washed up on the shores of Lake Ontario in just one morning.

Over the past month, about 300 dead fish have been frozen and sent to scientists at Cornell University for evaluation. The virus, hemorrhagic septicemia, was confirmed in these two fish in June: round gobies and muskellunge. It causes fatal anemia and hemorrhaging in many fish species but poses no threat to humans or other animals, the scientists say.

Researchers are awaiting test results for the possible presence of the virus in smallmouth bass and burbot. Preliminary indications are that it has spread.

"We have detected the virus in other fish species in the region, which may be contributing to the continuing fish mortalities," said Geoffrey Groocock, a postdoctoral associate at Cornell's Aquatic Animal Health Program.

The fish deaths may not be as bad as they seem, however.

More dead fish might be being reported simply because people are vacationing at the lakes during summer. Overall fish mortality rates "do not appear to be changing," Groocock and colleagues said in a statement.

So what to do?

"There is no cure for [this virus] in fish in an ecosystem as large as the Great Lakes Basin. Given this, it is likely that management practices designed to limit the spread of the virus will be put in place," Groocock said.