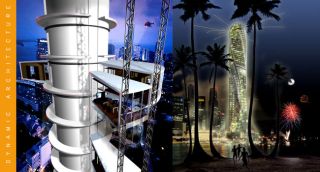 New Buildings to Dance in the Wind

A series of rotating buildings based on Dynamic Architecture will be built around the world, starting in Dubai, U.A.E. The Dynamic Architecture concept was introduced by Florentine architect David Fisher. The rotating buildings [VIDEO ] get their electrical power from wind turbines that are placed between floors and which rotate freely with the wind. Additional power is provided from solar cells on the tops of the individual floors. Each individual floor is able to rotate slowly, based on commands issued by the owners of condos or apartments on that floor. I assume that the building owners can also take control, for coordinated movements of the floors. Note that the rotation of the floors is slow and uses power - the rotation of the floors does not produce power. The building is constructed around a central core; each floor is composed of individual pie-like sections that are pre-built and hoisted up the central core (see illustration). The builder claims that rotating buildings can be constructed by just ninety people on the construction site; compare this to the typical skyscraper construction site, which may have up to 2,000 workers at a time.

Construction dates for the first building have not yet been announced, but the first one will be built in Dubai. Pre-fabricated units for the tower will be produced in a facility set up in Jebel Ali (a port 35 kilometers southwest of Dubai). The same units will then be shipped to eleven other major cities, including Moscow, Milan, New York and Tokyo, where similar towers will rise.

Science fiction writers have also made some use of the idea of rotating buildings. In his eccentric 1972 novel The Godmakers, Frank Herbert writes about a rotating house:

"Lewis was just telling me how our place is very much like his home on Chargon," Polly said.

"Old-fashioned, but we like it that way," Bullone said. "I don't like the modern trend in architecture. Too mechanical. Give me an old-fashioned tetragon on a central pivot every time."

(Read more about the rotating house)

For an overview of the rotating building and a quick look at the dynamic architecture that underlies it, take a look at this video.

Be sure to take a look at another "green" (that is, ecology-minded) Dubai building, one that was inspired by an ancient Middle Eastern design - Burj al-Taqa Dubai Energy Tower - High Tech Badgir.