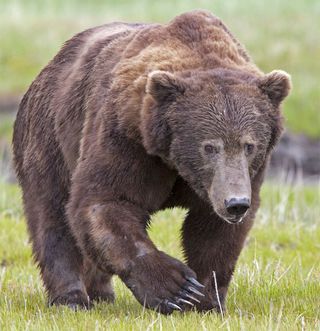 A male grizzly bear, also known as a brown bear. While the more common black bears are unlikely to kill when they are surprised or feel threatened by a human, grizzly bears, the more aggressive species, is more likely to kill in a defensive attack.
(Image: © © Daburke | Dreamstime.com)

A violent encounter took place at the end of June, in the wooded area behind a Canadian woman's back porch. Roughly four days later, a police dog found 72-year-old Bernice Evelyn Adolph's body after her daughter became concerned after not hearing from her mother. And the site, about 150 yards (137 meters) from Adolph's home, became the scene of a forensic investigation.

Her body, which bore obvious signs of animal feeding, was found partially covered in pine needles and debris. Shortly afterward, a conservation officer who arrived at the scene behind Adolph's home in the British Columbia town of Lillooet identified the incident as a likely bear attack.

Fatal bear attacks such as this one are rare: You are more likely to die in a lightning strike than to be killed by a bear. But it's summer, the peak season for bear-human conflicts, and reports of serious, sometimes fatal, encounters are making headlines around North America and abroad.

Just as for a violent crime committed by humans, those responding to a fatal or serious bear attack investigate the circumstances, collect evidence and even confirm the perpetrator's identity using DNA left at the scene and taken from the suspect. This step, made possible utilizing advances in genetic techniques, allows investigators to say with greater certainty that a dangerous bear no longer poses a threat, and, in some cases, protect innocent animals.

In Lillooet, conservation officers began collecting evidence and set up snares nearby. After an attack like this, bears will often partially bury their kill and return to feed later, said Rod Olsen, an inspector with the Conservation Officer Service. Meanwhile, they searched nearby woods by helicopter for likely culprits. Ultimately, the investigators found and euthanized five bears, the last on July 9, after the animal showed up in a snare near where Adolph's body was found.

"We weren't just looking for the bear that would have killed her; we wanted to remove any bears that could have potentially fed on her as well," Olsen said. "They have certainly lost a fear of humans when they have stepped to that point."

To confirm that the bear responsible for Adolph's death was among the five (and calm the fears of those in the community), forensic scientists attempted to match the DNA from the saliva and hair collected from the woman's clothing with those of the suspect bears' ears.

Top of the food chain

Close to 1 million black bears live in Canada and the United States, along with perhaps 70,000 grizzlies, which biologists call brown bears, according to Stephen Herrero, professor emeritus of environmental science at the University of Calgary and author of "Bear Attacks: Their Causes and Avoidance" (Lyons Press, 1988).

Every year, Herrero said, an average of three people in North America die in attacks by black bears or grizzlies — a low rate considering the number of bears and people on the continent. But the possibility still captures our collective, primal imagination.

"Everybody knows the power and strength of bears and that sometimes it can be turned on people and therefore people are concerned, fascinated, riveted," he said.

Summer, when both humans and bears are out and about, is peak season for bear attacks, according to Herrero. This year, reports of attacks of varying severity have made news not only in British Columbia, but in Arizona, Yellowstone National Park, Alaska, New Jersey, Colorado, and even Norway, which saw a fatal attack by a polar bear.

Bear attacks generally fall into two categories: predatory and defensive. Eighty-eight percent of fatal black bear attacks involve predatory behavior, in which a bear quietly stalks a victim, and 92 percent of those attacks involve male bears, according to Herrero's research. Defensive attacks happen when a bear, particularly a female with cubs, is startled and feels threatened. A startled bear can act blustery, snorting, charging or swatting the ground, Herrero said.

Grizzly bears, the more aggressive species, are more likely to kill when in defensive mode than are black bears, he said. [Video: Showdown at Grizzly River]

Bears are likely to get passes for attacks deemed defensive. In Yellowstone National Park on July 6, a hiker was killed by a grizzly bear after he and his wife surprised the bear and her cubs — the first fatal bear encounter in the park since 1986. Officials collected hair and scat samples for DNA analysis to include in grizzly research and to provide a reference in case this bear was involved in future incidents, but otherwise took no action against the bear, said Kerry Gunther, a bear management biologist at Yellowstone.

"If it had been a predatory or prolonged attack, or the bear had returned to scavenge the victim, then we would have taken action against the bear" by killing it, Gunther told LiveScience.

Park officials had less patience with a male grizzly bear that charged a hiker, tore through his backpack after the hiker threw it at him and ate the food inside. On Aug. 1, that bear, which had been chased from campsites and housing developments many times in recent years, was captured and euthanized.

No fancy lab work was necessary to identify this animal.

"This bear had a very distinctive coat color. A lot of bears it's hard to tell one from another," Gunther said. "He had a blond patch on each shoulder, in a kind of lightning bolt pattern."

On June 28, a male black bear, that had been scavenging food from a dumpster in the Arizona town of Pinetop, attacked and severely injured 61-year-old Lana Hollingsworth, who was walking her dog, according to news reports. After multiple surgeries, she later died from her injuries.

Officials had tracked the bear with dogs and shot it within hours. Then the bear was temporarily taken to a local funeral parlor, which had the ability to keep the large body cool, thus preserving the tissue until it could be transported to Phoenix, according to Anne Justice-Allen, a veterinarian and state wildlife health specialist.

The next morning, Justice-Allen and other investigators performed a necropsy on the animal's body, examining it for clues as to what this bear had been up to and why it attacked Hollingsworth. They searched its coat for trace evidence, collected material from under the claws, weighed the body and then opened it up from head to rear end to study the internal organs. They collected samples for testing and screened its stomach for clothing or human tissue.

"The bottom line was the bear appeared to be in reasonably good health, he was not particularly thin or particularly fat," Justice-Allen said. Sometimes a brain or liver disease can alter an animal's behavior; however, the necropsy revealed no visual signs of disease and the lab reports showed normal results.

To confirm that the dogs had found the guilty bear, they collected skin and muscle tissue from the body and sent them to the Wyoming Game and Fish Wildlife Forensics and Fish Health Lab for comparison against hair and saliva found on the woman's clothing.

The cause of the attack remained elusive.

"I didn't find anything in the examination. We can only make the determination based on how the bear was acting, and reports from people on the scene," Justice-Allen said. The fact that the bear was male made a predatory attack likely.

"The bear felt this person was, at the very least, an intruder," she said. "He did not appear to be 'eating' the victim, but he did repeatedly attack her."

After long hours, lab workers confirmed that, yes, the right bear ended up on the necropsy table.

The technique used by forensic labs to confirm the identity of an attacker, bear or human, is essentially the same — investigators look at specific, short sections of DNA. [Read: How DNA Evidence Can Close Bear Attack Cases]

Scientists' ability to analyze the genetic evidence left at the scene of a wildlife attack owes a great deal to research aimed at protecting populations. And in one European case, German researchers doing genetic work on European brown bears — the same species as the American grizzly — in Bulgaria, found themselves investigating an attack after a man in a mountain village was killed by one in May 2010.

Large carnivores became extinct in much of Europe several centuries ago; however, bears remain in Eastern Europe, although little research is being done to collect data important to help protect them, such as the size of populations, according to Carsten Nowak, one of the German researchers and a principal investigator at the Senckenberg Research Institutes and Natural History Museums.

The researchers received bear hair collected from the man's corpse as well as samples from a bear that was shot three days after the attack. But their analysis did not yield a match. The scientists worried the negative result might encourage the killing of more bears, but they released the information to their Bulgarian partner, the Balkani Wildlife Society.

A second bear attack occurred two days later, and a number of other bears have since been killed. Samples from two other suspect bears they received later also yielded negative results.

"We know in general the people there were really shocked and the number of bears killed increased," Nowak said. "It was very bad for bear conservation."

The hunt in British Columbia was more successful. British Columbia received a positive match, indicating that the last black bear, a male they had snared where Adolph's body was found, turned out to be the guilty one. Saliva found on the victim's clothing, which had come off during the attack, provided the conclusive evidence.

"It was another tool we needed," Olsen, the inspector, said of the DNA analysis. "We are just trying to make sure we have got the right animal, and often the physical evidence at the scene can lead us to the right animal."