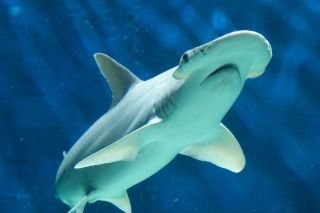 This bonnethead shark may be the oldest of his species, according to officials at the Tennessee Aquarium in Chattanooga. The shark, part of the hammerhead family, has lived in captivity at the aquarium since 1991, and scientists peg its age at approximately 22 years old. That's 10 years older than most wild bonnetheads and five years older than the oldest bonnethead shark ever caught in the wild. [Read Full Story]
(Image: © Tennessee Aquarium)

An aquarium in Tennessee is home to what may be the world's oldest bonnethead shark, a feisty 3-foot (1 meter)-long fish in the hammerhead family.

The shark, originally from Florida, is approximately 22 years old, 5 years older than the oldest bonnethead ever caught in the wild. It's also only two years younger than the Discovery Channel's popular annual series "Shark Week," which is ongoing this week.

Bonnetheads are the smallest of the hammerhead sharks, and their curved heads are shaped more like a spade than a hammer. These tropical sharks usually live to be around 12 years old in the wild, but one male bonnethead has been thriving at the Tennessee Aquarium in Chattanooga since that place opened in 1992. When aquarists first brought the shark to Tennessee in late 1991, they estimate that it was 2 or 3 years old. [On the Brink: A Gallery of Wild Sharks]

There may be older bonnetheads swimming the seas, but because captive animals usually live longer than wild animals, Tennessee Aquarium officials suspect they have one of the Methuselahs of the shark world on their hands.

Despite his advanced years, the shark seems to be holding his own.

"You still need to move swiftly while feeding this guy," aquarist Rob Mottice said in a statement. "He's very quick and will occasionally nip at fingers if a diver doesn't release food fast enough."