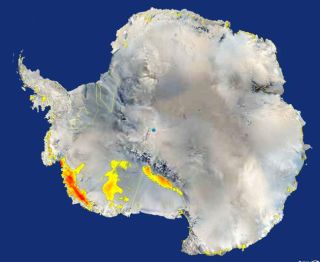 Warm temperatures melted an area of western Antarctica that adds up to the size of California in January 2005, scientists report.

Satellite data collected by the scientists between July 1999 and July 2005 showed clear signs that melting had occurred in multiple distinct regions, including far inland and at high latitudes and elevations, where melt had been considered unlikely.

“Antarctica has shown little to no warming in the recent past with the exception of the Antarctic Peninsula,” said Konrad Steffen of the University of Colorado, Boulder. “But now large regions are showing the first signs of the impacts of warming as interpreted by this satellite analysis.”

NASA’s QuikScat satellite detected snowmelt by radar pulses that bounce off of ice that formed when snowmelt refroze (just as ice cream turns to ice when it is refrozen after being left out on the counter too long.)

Maximum high temperatures of 41 degrees Fahrenheit that persisted for about a week in Antarctica caused a melt intense enough to create an extensive ice layer.

Evidence of melting was found up to 560 miles inland from the open ocean, farther than 85 degrees south (about 310 miles from the South Pole) and higher than 6,600 feet above sea level.

Water from the melted snow can penetrate cracks and the ice, lubricating the continent’s ice sheets, sending them toward the ocean faster and raising sea levels, the scientists said.

“Increases in snowmelt, such as this in 2005, definitely could have an impact on larger scale melting of Antarctica’s ice sheets if they were severe or sustained over time,” Steffen said.

No further melting has been detected through March 2007.