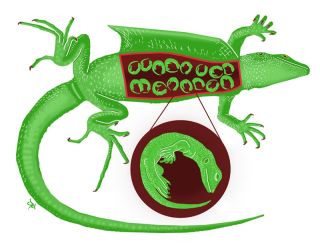 Just days before giving birth to at least 15 young, a lizard somehow kicked the bucket. That was 120 million years ago, and researchers have now found the fossilized pregnant lizard with fully formed embryos in her belly.

The fossil, discovered in China, is the oldest known example of a lizard bearing live young. Lizards and other reptiles typically lay eggs.

This fossil shows that pregnancy is as old as the dinosaurs, and seems to be widespread, even in ancient lizards. Mammals seem to have evolved pregnancy around this time as well.

The mama-to-be is a species in the genus Yabeinosaurus, which lived during the early Cretaceous period when dinosaurs trod the Earth; other examples of this species date back 125 million years at least. [Pictures of pregnant lizard]

"We have several specimens of this lizard (Yabeinosaurus) already, but each one tells us a little more about its biology," Evans said.

This specimen is about a foot long (30 cm) and contains at least 15 complete embryos. They are so well preserved the researchers could even see their fully formed teeth. The lizard would have been just days away from giving birth, they said.

Mammals, like humans, aren't the only animals to give birth to live young. About 20 percent of modern lizards and snakes bring their babies to term, while birds and other reptiles, including crocodiles and turtles, are exclusively egg-laying. Pregnancy seems to have evolved in lizards and snakes more than 100 different times.

The newly discovered lizard lived by the water but also spent time on the land, which would've made it tough to get around with cargo onboard. Other pregnant lizards, which lived during the late Cretaceous, were strictly water-living animals; lizards impregnated with babies could have maneuvered more easily in the water than on land.

Bearing live young has its upsides, among them the fact that a mama doesn't have to leave her babies in a nest where they could be preyed upon.