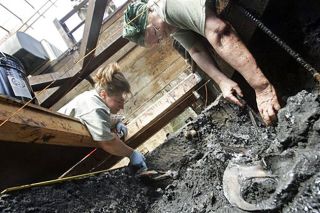 Volunteers clear tar from Ice Age bones being excavated from Pit 91 at the La Brea tar pits in Los Angeles. The yield of well-preserved bones, plant remnants, and microorganisms from the world's only Ice Age paleontological dig in a city has not slowed since scientists began digging there in 1915.
(Image: © Reed Saxon/AP)

Vehicles may crowd the asphalt of downtown Los Angeles freeways above ground, but below ground hundreds of newly discovered bacteria thrive by munching on heavy oil and natural asphalt. Trapped in the Rancho La Brea tar pits 28,000 years ago, the bacteria are equipped with special enzymes that can break down petroleum, environmental scientists at the University of California, Riverside report in a recent issue of Applied and Environmental Microbiology. The petroleum-dismantling enzymes could be used to clean up oil spills, create new medicines and manufacture biofuels, among other uses. "Asphalt is an extreme and hostile environment for life to survive," said Jong-Shik Kim, who initiated the study. But “these living organisms can survive in heavy oil mixtures containing many highly toxic chemicals” with no water and little oxygen, he said. Bacteria that survive on petroleum produce methane gas as waste, so when Kim and his colleague Dave Crowley noticed the gas bubbling out of the oily soil, they knew they had found something unique. The two eventually sequenced groups of the tar pit bacteria’s DNA to be certain. "Previously, some bacteria had been cultured from the asphalt,” Kim said, “but no one had been able to extract DNA from the asphalt to study the entire microbial community.” To identify the bacteria and their unique enzymes, Kim and Crowley froze the tar with liquid nitrogen and then pulverized it into a powder. With the tar-hungry bacteria exposed, the scientists extracted the DNA. But where did the oil-munching bacteria most likely come from? "Soil microorganisms that were trapped in the asphalt,” said Crowley. But the bugs’ long-lost relatives may have also originated from underground oil reservoirs.