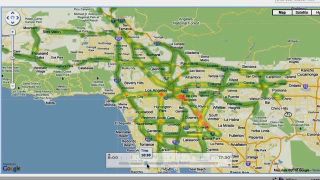 "The idea was to capture a real-world environment and then render it virtually so it feels like you are in that area. So you are immersed in that geographical area as if you are in the real world," study researcher Cyrus Shahabi said in a statement.

What makes Geo-Immersion unique is its capability to mesh existing information databases and social networks , and to integrate them with maps.

Geo-Immersion is the foundation of several applications Shahabi has in the works. One project, called the "clever transportation" takes real-time traffic data and overlays it onto the maps. "These historical patterns are created based on real-time data that we collect," Shahabi said. "[It] shows how the trend of traffic changes over the course of time."

They've also used the geo-immersion capabilities in the application iCampus, in which USC students can see real-time updates and locations of their Twitter and Facebook friends, locations and estimated arrival times of the campus trams, which are equipped with GPS units. The same type of mapping application could be tailored to small cities and other college campuses.