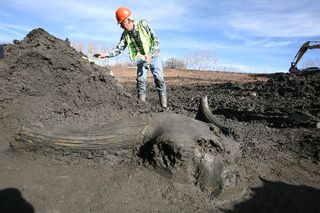 The scientists in charge knew early on that this dig would require more shovel work than they could do alone, so they called in reinforcements, including 15 educators from the surrounding valley. These teacher-volunteers worked alongside the scientists and other volunteer diggers, turning up clues to the creatures that inhabited this area somewhere between 150,000 and 50,000 years ago.

The dig ended Sunday (July 3), having yielded 4,826 large bones in seven weeks and leaving the teacher-volunteers with lessons to pass on to their students.

Sandy Jackson, who teaches archaeology and anthropology at Colorado Mountain College, found a dozen bones during her six days at the site, including a mastodon's patella, or kneecap, which first appeared to be a big, round rock about 8 inches across.

"You always describe to the students the size of the animals, but when you are actually holding the bone, it really brings it home," she said.

This wealth of prehistoric animals’ remains had accumulated in an ancient lake on a ridge above the resort town of Snowmass Village, some 100 miles (165 kilometers) west of Denver.

“Animals, plants, insects, even small crustaceans all piled on top of one another,” said Ian Miller, curator of paleontology at the Denver Museum of Nature & Science. Excavating through the layers of sediment holding the bones was “as if we are reading from the pages of the history of life in the Rockies.”

Andre Wille, a science teacher at Aspen High School, found a mastodon jaw on his last day at the site.

“It is massive, like the size of a table, a small table ? very large and powerful, and obviously prehistoric,” Wille said. The jaw, with molars intact, had been dyed black, probably by plant pigments, as it sat on the bottom of an ancient lake on the spot. “I found a lot of other great things, but that definitely topped it.”

Like other teachers, Wille began looking for a way to get to the site after hearing in October that the first bones, from a mammoth, turned up over the blade of a bulldozer at the site of a future dam. The Denver museum took charge of the excavation, removing about 600 bones, then returned in May for a seven-week dig that wrapped Sunday so construction could resume on a dam to hold a reservoir for the community below.

In addition to calling on roughly 250 trained paleontology volunteers, the museum scientists reached out to educators, as extra hands for 10-hour days of often hard labor and as communicators who could share their experience.

Wille not only plans to tell his students about the experience and show photos, he envisions bringing his students to the site and encouraging them to come up with theories about how such a prehistoric menagerie of animals came to be buried there.

Shovels weren’t the only tools for paleontologists looking for clues to ancient environments. Excavators also packed up soil from the site for screen washing, a process by which the dirt is filtered through sieves in the search for things too small to catch a digger's eye.

For Georgina Levey, a sixth-grade teacher at Aspen Middle School, finding the small things was one of the best parts.

“I found a couple of vertebrae from a salamander; they are just awesome to look at," Levey said, explaining that these backbones were no bigger than a quarter of her fingernail. "To be able to look at bones that small and realize you can find that even among all of these enormous things is awesome to me."

More than the charismatic big bones, small finds can tell about year-round conditions at the site, Miller said.

"A big animal like a mastodon can pick up and walk away if they don't like it," he said. "Small guys like salamanders, they can't go anywhere; their entire life is spent here." [Top 10 Animal Journeys]

A rite of passage

An initiation came with the first bone Jackson and other diggers found. After millennia of saturation by ancient lake water and burial in the soil, the bones released water when uncovered. This liquid became celebratory champagne.

When she dug up a shard of mastodon bone, most likely from a pelvis, she tasted the "bone juice."  She said she was thinking, "How can I pass up the opportunity to drink water out of a bone that is maybe 100,000 years old? What type of example does that set for your students?"