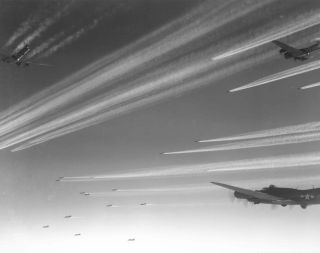 This is a formation of B-17F Flying Fortress bombers of USAAF 92nd Bomb Group over Europe, circa 1943. Contrails are visible in the sky.
(Image: © United States Air Force)

Allied bombing raids during World War II turned the English sky white with contrails, providing a case study for modern scientists studying how the weather is affected by these long, feathery lines of condensation that form behind aircraft.

Researchers focused on larger bombing raids between 1943 to 1945 after the United States Army Air Force (USAAF) joined the air campaign against Adolf Hitler's forces. Civil aviation was rare in the 1940s, so these combat missions represented a huge increase in flights and in potentially weather-altering contrails. [Pictures of Contrails]

"It was apparent to us that the Allied bombing of World War II represented an inadvertent environmental experiment on the ability of aircraft contrails to affect the energy coming into and out of the Earth at that location," said study researcher Rob MacKenzie who conducted the work at the Lancaster Environment Centre in the United Kingdom.

Contrails have complex effects on the Earth's surface temperature: They can reflect sunlight, causing cooling, or they can trap long-wave radiation, preventing it from escaping to space, and so warming the planet's surface.

MacKenzie and his collaborators searched military and weather records and selected raids that involved more than 1,000 aircraft followed by raid-free days with similar weather. They found a raid that took place on May 11, 1944, made for the best case study.

That morning 1,444 aircraft took off from southeast England into a clear sky. The contrails from these aircraft significantly suppressed the morning temperature increase across areas with a high density of flights, the researchers found.

"This is tantalizing evidence that Second World War bombing raids can be used to help us understand processes affecting contemporary climate," MacKenzie said.

The research is detailed in the International Journal of Climatology.