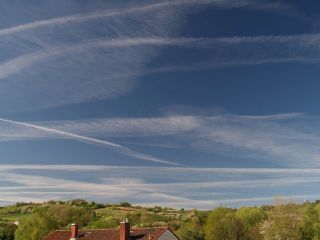 Condensation trails, called contrails, in the process of losing their distinctive line shape above the roofs of Ingelheim, Germany in 2004.
(Image: © Stephan Borrmann)

The long, feathery lines of condensation that form behind aircraft, called contrails, have more of an immediate warming effect on the Earth's surface than the carbon dioxide or other greenhouse gases that the aircraft emit, a new study calculates.

However, the researchers add, contrail clouds disappear within a day or two; the potent greenhouse gas carbon dioxide lingers in the air for many years.

Contrails form when the hot, moist plume of exhaust generated by an airplane's engines mixes with cold air in the upper atmosphere. Liquid droplets form and then freeze, forming a straight, white line. Over the span of a few hours or more, the contrail loses its definition and becomes a wispy cirrus cloud. But if the atmosphere is very moist, the line shape can exist for days, said Ulrike Burkhardt, a researcher at the Institute for Atmospheric Physics at the German Aerospace Center. She and colleague Bernd Kärcher calculated contrails' effect on climate.

If there were no other clouds in the sky, contrail cirrus clouds would cover up to 10 percent of European skies and about 6 percent over the east coast of North America, another heavily trafficked region, they calculated. They disappeared from American skies briefly when nearly all airtraffic was grounded after the 9-11 attack.  Some research has indicated that this resulted in more variation in temperatures, particularly warmer daytime temperatures. [Even Ships Can Form Contrails]

Like natural clouds, contrails have contradictory effects on the Earth's surface temperature. Their ice crystals reflect solar light, decreasing the amount of light and heat that reach the Earth's surface, but at the same time they trap long-wave radiation (such as infrared light) coming from the other direction, preventing it from heading into space after it gets reflected off the ground. This heats the planet's surface.

The thickness of the contrail clouds, technically known as the optical depth, determines how much heat they trap. Many are too thin to be visible to the human eye or satellites, and these thin contrail clouds contribute negligibly to warming, the researchers write in the most recent issue of the journal Nature Climate Change.

The size and shape of the contrails' ice particles are also important in determining how much heat is trapped, Kärcher said.

Contrail clouds have another complex effect: They use up water vapor that normally could go into the formation of natural cirrus clouds, according to Kärcher and Burkhardt.

When all of these effects are considered, contrail clouds ultimately alter the Earth's energy budget in a way that warms it, by reducing the amount of energy that escapes back out into space, the team found. Greenhouse gases do the same thing, trapping energy that would otherwise escape into space and so warming the planet. [Longer Airline Flights Proposed to Combat Global Warming]

Airplanes emit greenhouse gases, including carbon dioxide, in addition to forming contrails. However, in terms of the immediate change in the Earth's energy budget, the contrail clouds have more impact than those emitted greenhouse gases, the researchers calculated.

Even so, carbon dioxide can linger in the atmosphere for hundreds of  years, while contrail clouds lose their potency within days, Kärcher said.

"Assuming a steady growth of air traffic, then contrails would remain for some time the most important aviation-related warming. If, on the other hand, aviation volume is decreasing, then carbon dioxide would become more important relative to contrail cirrus," Burkhardt wrote in an email to LiveScience.