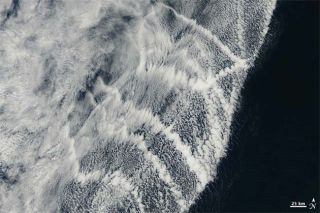 Although ships sail on the ocean, they can leave tracks in the sky. On Oct. 5, a NASA satellite snapped a shot of this phenomenon forming in a bank of clouds off North America’s west coast.

The white trails look vaguely like the condensation trails, or contrails, left behind by airplanes, but they actually result from ship exhaust.

The exhaust trails appear whiter than the surrounding clouds because the "tracks" contain smaller cloud droplets, NASA's Earth Observatory explained in a statement.

Compared to surrounding air, ship exhaust has more particles, and each particle can act as a nucleus around which water vapor condenses. Because the available water is divided up among a greater number of particles, the resulting ship tracks consist of cloud droplets that are smaller and more abundant than those of the surrounding clouds.

A cloud-free area to the east in the new image apparently holds drier air, which lacks sufficient moisture to lead to cloud formation, the researchers said.

The true-color image was captured by NASA's Terra Satellite, launched in 2000 as part of NASA's Earth Observing System.