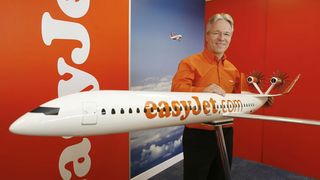 British low-cost airline easyJet has unveiled a design for a radically different-looking short-haul airliner that it says would be highly environmentally friendly and could be built by 2015.

“The lightweight structure and open-rotor engines are based on technologies that are being developed right now by the major manufacturers. The easyJet ecoJet is realistic and it is achievable,” he added.

“If the easyJet ecoJet were to be made available today, we would order hundreds [of] them for fleet replacement and to achieve the ‘green growth’ that our industry has committed to,” said Harrison.

A 2004 study by NASA documented a 1 percent per decade increase in cirrus cloud cover over the United States, presumably due to increased air travel. Jets leave condensation trails, or contrails, that sometimes spread out and are indistinguishable from clouds. The researchers claimed that this extra cloudiness could account for a warming trend of half a degree Fahrenheit per decade in the years between 1975 and 1994.

EasyJet said its projection that the ecoJet would generate a 50 percent reduction in CO2 emissions was based on the latest research by leading aerospace manufacturers. The ecoJet’s engines would produce 25 percent of the improvement and its lightweight airframe 15 percent, while improvements to air traffic control technology and design would provide the remaining 10 percent.

The airline said that given its current passenger-cabin configuration and network, the eco-liner would generate less than 47 grams of CO2 per passenger kilometer in easyJet service.

EasyJet’s current operations generate 97.5 grams of CO2 per passenger kilometer and the Toyota Prius emits 104 grams, according to the airline. It noted the European car industry had recently been given a target to achieve 130 grams of CO2 per kilometer.

Today’s most-produced short-haul airliners are the Airbus A320 and the Boeing 737 families. These aircraft are being ordered in such numbers that some customers aren’t due to receive their new jets for another seven years. The A319, a member of the Airbus A320 family, is numerically the most important aircraft type in easyJet’s fleet. It recently took delivery of its 100th A319.

The key features that easyJet said would make the ecoJet radically more environmentally efficient than today’s airliners are:

Rear-mounted “open-rotor” engines (also known as unducted fans), which would offer better environmental performance for short-haul flying due to their higher propulsive efficiency. EasyJet believes significant difficulties in fixing such large engines under the wings of a narrow-body aircraft would make rear-mounting the best solution.

An aircraft design that would feature a lower cruise speed to reduce drag and a shorter range to reduce weight A gear box between the engine and the open-rotor blades would keep subsonic the speed at which the blade tips would rotate during take-off and landing, reducing engine noise. Mounting the engines above the ecoJet’s tailplanes and tailfins would shield the ground from engine noise. Noise reductions would also come from airframe improvements, which would include omission of slats on the leading edge of the wing. The airframe would be made of advanced weight-reducing materials similar to those used in current airliner programs such as the Boeing 787. Boeing estimates the 787 is 27 percent more fuel efficient than the aircraft it will replace in many fleets.

As global demand for air travel matures over time, several step-changes in technology will be needed to reduce the emissions from aviation in 2050 to below 2005 levels, said easyJet. The ecoJet could provide the first of these step changes and itself could stabilize emissions from short-haul airline flying at 2005 levels until 2035.

“The aviation industry has an excellent record in reducing the environmental footprint of aircraft. Today’s aircraft are typically 70 percent cleaner and 75 percent quieter than their 1960s counterparts,” said Harrison. “Now we are planning the next generation that will help towards taking the plane out of the emissions equation.”

EasyJet’s A319-dominated fleet of 131 aircraft has an average age of 2.3 years. This is the youngest of any major airline in Europe, it says.

“We have recently called for over 700 of the dirtiest aircraft to be banned from Europe’s skies and are active supporters of the EU’s Emissions Trading Scheme and Single European Skies programme,” said Harrison.