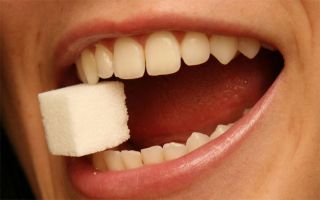 Why Do We Grind Our Teeth?

Nothing's cuter than a child who has lost his first baby tooth, unless this is quickly followed by the loss of several other teeth pulled because of cavities, leaving him with all the charm of a grinning hockey player. That scenario might not be too far off. Tooth decay among children under age 5 is on the rise for the first time in 40 years, according to a massive and long-awaited government study presented last week at the American Association for Public Health Dentistry meeting in Denver. The reason could be the increase in processed food children eat and a decrease in the fluoride they are exposed to, as kids drink more bottled water instead of fluoridated tap water , according to study lead Bruce Dye of the National Center for Health Statistics. Tooth fairy on OT Although baby teeth get replaced, they are not dispensable. Adult teeth can come in crooked if there are too many gaps in the set of baby teeth. And that second set is just as vulnerable to decay. Processed foods can contain high amounts of sugars and other simple carbohydrates, which are well known to promote tooth decay as they react with the bacterial film on the teeth to form acids that eat away at tooth enamel. Children often don't have the dexterity to brush their teeth well, so bacteria builds up. Fluoride at an early age can penetrate a young tooth and make it stronger, much like calcium strengthens bone. This is a natural process. Topical fluoride from water or toothpaste also makes bacteria produce less tooth-rotting acid. The U.S. Centers for Disease Control and Prevention considers water fluoridation one of the greatest public health achievements of the 20th century. The World Health Organization also readily endorses it. Studies around the world for the past 50 years have shown, almost systematically, that fluoride prevents tooth decay. You wouldn't know it, though, by the way many people continue to shun fluoride, which is in most water naturally to some degree. What started as worries about a communist plot to slowly poison Americans continues today with concerns that fluoride is causing cancer, Alzheimer's, low IQ and sterility. Worries are not unfounded. Too much fluoride, over 7 ppm in the water, can cause bone deformities; and the Environmental Protection Agency sets the limit at 4 ppm. But many minerals needed for good health, such as selenium, are toxic at high levels. Scientists have long established that about 1 ppm of fluoride in the public water supply was enough to provide tooth protection without causing harm. Flouride myths The Internet is home to vociferous opponents of fluoridation. While some of their arguments are valid—such as whether it is morally justified to force everyone to participate in this mass-medication scheme—some are a bit misleading. Myth: Fluoridation is banned in Europe. First, it is not necessarily wise the follow Europe's lead: After all, David Hasselhoff is a pop music star there. But Europe does promote fluoridation. In many European countries, water fluoridation is not efficient because of the design of the water systems. As a result, the use of fluoridated salt (akin to iodized salt) is widespread. The few nations that do not fluoridate water or salt recommend fluoride toothpaste. Myth: Tooth decay rates have declined regardless of fluoridation. This isn't quite true. Fifty years ago, when fluoridation was introduced, tooth decay rates plummeted. Many countries in Europe stopped fluoridation by 1970 and still saw declines on par with countries that continued fluoridation. But the decline is generally attributed to better oral care, including dental checkups and tooth brushing, which are complementary ways to minimize tooth decay. Fluoridation is not a cure all and not the only way to achieve a desired effect. Myth: Fluoridation causes many diseases. The levels of fluoride in water, salt or tooth paste have not be shown over the past 70 years of intense study to cause anything worse than dental fluorosis, which results in staining and mottling. The most recent argument against fluoridation—which is certainly biologically plausible and worthy of investigation—is that the type of fluoride used in water, called silicofluorides, can leech lead from pipes and cause neurological disorders. This interesting research by Roger Masters of Dartmouth College, published in 2000 in Neurotoxicology, has not been verified by numerous studies. The water fluoridation controversy isn't dominated by misinformed loons. We're talking about adding a potentially toxic substance to the water supply. Caution is appropriate, and many anti-fluoridation arguments are compelling. Ideally, everyone would brush their teeth several times a day for at least two minutes, then floss at least once a day, and see a dentist at least twice a year. That's not going to happen in the developing world and in poorer regions of the United States. This is what makes fluoridation so attractive. Christopher Wanjek is the author of the books “Bad Medicine” and “Food At Work.” Got a question about Bad Medicine? Email Wanjek. If it’s really bad, he just might answer it in a future column. Bad Medicine appears each Tuesday on LIveScience.