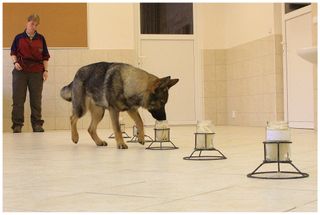 An identical twin might seem like a perfect alibi for any crime one wanted to commit, but now it turns out dogs can tell such twins apart by scent, researchers find.

Research investigating whether dogs can distinguish identical twins from one another has gone on for more than a half-century. However, the findings of these studies have proven conflicting and inconclusive over the years.

Scientists in the Czech Republic suggested any discrepancies seen between the results of past experiments might have been due to different levels of training of the dogs used in each. Instead, they suggested using police dogs with the highest level of training, noting that such canines have been used in police lineups to identify people by scent in Europe and the United States. [10 Things You Didn't Know About Dogs]

Researchers started with samples swabbed from the bellies of two sets of identical twins, boys age 5 and girls age 7, as well as two pairs of fraternal twins, 8-year-old girls and 13-year-old boys. Experiments with 10 German shepherds then had each dog go through 12 tests, all of which involved the canines sniffing a swab and then seeking out a matching scent from seven possibilities.

The scientists found all the dogs picked out the correct match every time. They distinguished identical twins from one another without fail, even though each twin lived in the same place and ate the same food as their counterpart. In comparison, DNA tests could not tell identical twins apart, although they could naturally tell fraternal twins apart, which are only as genetically similar as any regular pair of siblings.

"Dogs can discriminate the odor of identical twins if well-trained," said researcher Lud?k Bartoš, an ethologist at the Czech University of Life Sciences in Prague.

As to how dogs can tell identical twins apart, each might be influenced by different outside factors, such as infections that might alter an individual's odor, researchers conjectured. "It should be emphasized, however, that we are far from being able to elucidate the reason why the twins differ," Bartoš told LiveScience.

Future research can focus on whether or when the scents of identical twins start to differentiate with age.

The scientists detailed their findings online June 15 in the journal PLoS ONE.