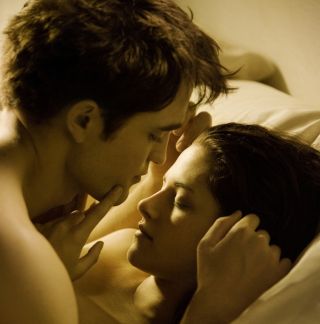 Rumors have flown about how the young adult novel "Breaking Dawn" (Little, Brown Books for Young Readers, 2008) will translate to the big screen. The book, part of the popular "Twilight" series, includes references to rough sex and bloody supernatural childbirth.
(Image: © Summit Entertainment)

Television, movies and video games aimed at kids and teens get lots of attention for their portrayals of violence and sex. But a new study finds that popular teen books, too, can be surprisingly sexual, meaning that reading may not always be the wholesome activity that parents expect.

In fact, researchers reported online June 8 in the Journal of Sex Research, books aimed at 12- and 13-year-olds were no less sexy than books aimed at readers ages 14 and up. In addition, sex was rarely presented in a healthy light: Contraceptives and practical consequences were almost never mentioned, said study researcher Sarah Coyne, a psychologist at Brigham Young University. (Brigham Young University is operated by the Church of Jesus Christ of Latter-day Saints and is the largest religious university in the United States.)

"I would never argue for censorship," Coyne told LiveScience. "But I do think we're missing something here."

The "Gossip Girl" books and a vampire book, "Chosen," part of the "House of Night" series, were particularly focused on sex, Coyne said.

Electronic media consumption takes up a big chunk of kids' and teens' lives. A 2010 Kaiser Family Foundation study found that, by multitasking, 8- to 18-year-olds actually manage to squeeze almost 11 hours worth of media consumption into 7.5 hours a day.

But kids still read, too. The same study found that, on average, this age group spends 25 minutes a day reading books for pleasure. And researchers say there's no reason to think that the messages in books don't sink in.

"Teen readers are likely to be very involved or engaged or what we call 'transported' by the narrative," said Jane Brown, a professor of journalism and mass communication at the University of North Carolina. Brown, who was not involved in the current study, said that tweens and teens often identify strongly with book characters — take, for example, the kids who dressed as wizards to camp out for "Harry Potter" book releases.

"When that happens, what we know from other research is that [kids] are more likely to accept the story and find it persuasive," Brown told LiveScience. "So we would expect that a teen reader who is transported by the narrative would be more likely to engage in the kind of behavior she is reading about."

Several long-term studies have found that kids exposed to more sexual media early in life go on to engage in earlier sexual behavior than their peers, Brown said. (Other surveys and lab studies turn up similar results.) Some questions still remain about whether the sexy media causes the behavior or whether kids who are precociously interested in sex seek out sexier books and movies.

Coyne and her colleagues culled the top 40 books for tweens and teens from a 2008 list of best-sellers published by The New York Times. About half of the books were geared toward kids ages 9 to 11, 33 percent were aimed for 12- and 13-year-olds, and the rest were for kids ages 14 and up.

Many of the books the researchers examined were free of age-inappropriate sexual content, Coyne said. The "Harry Potter" books, for example, are fairly free of sex. Of the 55 percent of books that did have sexual content, Coyne estimated that only a half-dozen or so had explicit or implicit references to sexual intercourse.

"A lot of the books were just great," Coyne said. "But other books had quite a bit, some quite graphic sexual content. Some that I was actually really surprised that it was aimed at an adolescent audience."

Like TV and movies, books rarely dealt with what Brown calls the "three Cs:" contraceptives, consequences and commitment. About a third of the 56 incidences of sexual intercourse in the books took place between people not in relationships, Coyne found. And birth control was only mentioned four times. [The History & Future of Birth Control]

"Probably the books that are said to be for 12- to 13-year-olds are being read by about 10- to 11-year-olds," Brown said. "And you may not want them reading about sexual intercourse, at least not how it's being depicted."

The goal is not to censor books or discourage reading, Coyne said. However, she said, parents should be aware that you can't always judge a teen book by its cover. In some cases, she said, the content of a book aimed at a 12-year-old would earn it an R rating if it were a movie.

"What I would love is more information on the back of the book about its content," Coyne said. "That just empowers parents."

Editor's Note: This article has been corrected to reflect the correct title for the "House of Night" vampire series.