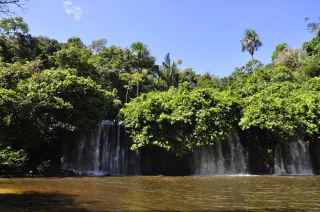 This photo depicts a waterfall on the Juma River near the town of Apui, in Amazonas State. Sweating from the hike to reach it, Walker swam across the pool at its base, only to worry halfway to the other side about possible anacondas lurking in the depths. He was seized by momentary panic before continuing on his way, as quietly as possibly, trying not to disturb the water.
(Image: © Robert Walker, Michigan State University; Eugenio Arima, University of Texas at Austin; Ritaumaria Pereira, Michigan State University)

Robert Walker is a professor of Geography at Michigan State University, with a Ph.D. in Regional Science from the University of Pennsylvania. He grew up in Florida, where he learned to value the wilds of nature, but also saw the price of poorly planned development. Walker studies land-cover change, and in particular the loss of tropical forests in Amazonia. His research approach is one of "boots on the ground," and he draws intellectual nourishment from grueling field campaigns in Amazonia (the Amazon rain forests). In conducting his research, Walker has spoken with thousands of frontier residents, including farmers, ranchers, loggers, gold-miners, Indians and fellow adventurers. In the process, he's traveled by jeep down many of the roads in the region, logging thousands of miles. Walker cannot imagine a summer without an opportunity to rough-it south of the border, but he is always thankful to return home to his wife and family in Michigan, and the rejuvenating waters of the Great Lakes. Read Walker's response to the ScienceLives 10 questions below.

What inspired you to choose this field of study? I was inspired to study environmental problems by my personal experiences with environmental degradation in the State of Florida, where I grew up. I saw firsthand the obliteration of pine flatlands, mesic hammocks, mangrove estuaries, and coral reefs, and I could never understand why people would want to exchange the wildness of the landscape for a built environment. I also witnessed the channelization of the Kissimmee River to make way for Disney World, which seemed completely illegitimate to me as a child. Through the 1950s and 1960s, I saw Florida change from a beautiful tropical-subtropical paradise to a land of strip malls, theme parks and modular housing. It was enough to make me care, and leave. I know that people need to impose on nature for subsistence and livelihood. I also know that they need nature for other purposes.

What is the best piece of advice you ever received? My best piece of advice was that one must never give up, or admit defeat, in pursuing a cherished objective. Someone once told me that success is the ability to persist in the face of continuous failure. This is my motto, and it has sustained me through proposal review cycles, manuscript rejections, and sleepless nights wondering where the funds will come from to continue my work.

What is your favorite thing about being a researcher? My favorite thing about being a researcher is being allowed to let my mind wander, and to see patterns and symmetry that I hadn't seen the day before. I often wake in the morning, wondering what new insights will greet me through the course of the day. I have the same sensation when sitting down to a manuscript in preparation, knowing that a blank page is also a field of thought, and therefore a pleasure. A researcher's life is a life of continuous imagination.

What are the societal benefits of your research? The societal benefits of my research are that it affords insight into a process of environmental change of global concern, namely the loss of our tropical forests. To be effective in addressing problems, policy must be based on an understanding of the human beings whose actions lie at their root. This is especially so with deforestation, for trees hardly fall down in massive clear-cuts of their own volition. Environmental policy, in this case, must incentivize people away from such actions, which can only be done if it is known why they engage in them in the first place.

Who has had the most influence on your thinking as a researcher? I can mention three people here. The first was Howard Odum, the ecologist, who taught me that the world is a system of systems of systems, ad infinitum. The second was Daniel Vining, a social scientist at the University of Pennsylvania. He taught me to question everything and assume nothing, to approach problems from the ground up, to distrust received wisdom. The third was Ronald Miller, an operations research specialist, also at the University of Pennsylvania. He taught me mathematics, and gave me the desire to translate what I saw into logical structures.

What about your field or being a researcher do you think would surprise people the most? I think it would surprise people to realize how little is actually known about the world we live in, that there are research frontiers in every direction. I think it would also surprise people to realize that methodology is hardly fixed, that scientific approaches all have a seat-of-the pants component, that guess work and inspiration play huge roles in any scientific endeavor. I remember talking with a politician maybe ten years ago about deforestation. He was astonished when I told him there was controversy about rates of forest loss. He assumed that because it was such a global problem, the science would have been completely nailed down, end of story. He wasn't that interested in learning about measurement error, or problems with cloud-cover, either. Not to mention all the disagreements about what was causing the problem.

If you could only rescue one thing from your burning office or lab, what would it be? I would quickly download all of my manuscripts and data onto an external drive, and run like hell. I know I'm only allowed to take one thing here, but on my dash from the office I'd also grab an armful of Brazilian books, documents, and maps that are impossible to come by in libraries or stores in the United States, stuff it's taken me years to collect through opportune encounters, or purchases in remote places.

What music do you play most often in your lab or car? I play Brega, which is a working-class Brazilian music from the Amazonian gold-mines. It's fast-paced and rather raunchy, and would never be aired in the United States if the songs were sung in English, because the lyrics can be crude. In fact, Brega is slang for "low-class." But, the music's great, whether by Banda Calypso, Banda da Lourinha or even Fruta Sensual.