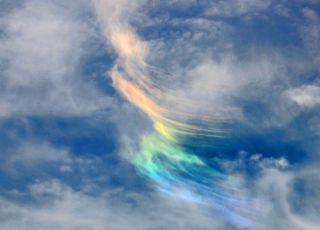 A colorful apparition materialized over Washington this week; the rarely glimpsed, rainbow-tinted specter appeared and vanished in the space of just minutes.

Fortunately for anyone who didn't look up at precisely the right moment, an enterprising resident of Anacortes, a small town about 80 miles (128 kilometers) north of Seattle, captured the mysterious light show on film.

"My wife said, 'Wow, look at that! Too bad you don't have your camera,'" said Del Zane, a retired software executive and photographer.

The couple was in the car after a morning bike ride and lunch — and just a half-mile from home. "So I just gunned it," Zane said.

A few minutes and a mad dash later, Zane had his camera in hand, pointed it skyward and started snapping pictures.

"It was very colorful and striking, and in just a small portion of the sky," Zane told OurAmazingPlanet. "I hadn't seen anything like it, that's for darn sure."

The colorful phenomenon, known officially as a circumhorizon arc, occurs when sunlight strikes cirrus clouds — the kind that typically look like cotton candy and form very high in the sky — at a certain angle.

"Cirrus clouds are composed entirely of ice crystals because they're so high up," said NASA's Rob Gutro. "The higher up you go, the colder it gets and they're beyond the freezing point."

The clouds' ice crystals act the same way crystals in a sparkly bracelet or ring might. When light hits the crystals' facets at a certain angle, it is separated out into all the colors in the spectrum.

However, because the light show depends on the sun's angle, these cirrus rainbows can be seen only at certain times of the year in certain spots on the globe.

"It depends on the position of the observer," Gutro told OurAmazingPlanet.

The sun must be at an angle above 58 degrees, so the further from the equator you are, the shorter your window to see a circumhorizon arc, according to the website Atmospheric Optics.

In Seattle, the sun is high enough to produce the colorful spectacles from May through August. Travel south to Houston, where the sun stays higher in the sky for a longer portion of the year, and you can catch a glimpse from March through September.

Zane said he's pleased with his pictures, but says even they don't quite capture the brilliance that was briefly on display.

"We looked up and it was beautiful," Zane said. "I'd say it was there probably no more than ten minutes."